The mood of UK poker players attending the World Series of Poker must resemble the current UK weather after our worst start to a WSOP tournament series for years. 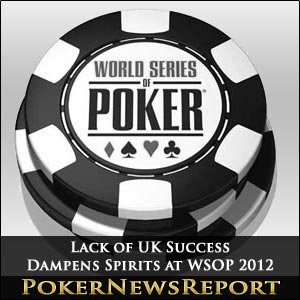 The mood of the UK poker players attending the World Series of Poker must resemble the current UK weather after our worst start to a WSOP tournament series for years.

As we approach the half-way mark of the 43rd annual jamboree, only Chris Bjorin has come close to winning one of the coveted bracelets, and an early run of final table appearances by UK poker players seems to have fizzled out like a damp weekend in Weymouth.

You have to go back to 2007 to find fewer final table appearances by UK poker players than has been achieved at this stage of proceedings, and after last year´s fantastic start to the WSOP – when British entrants had achieved three bracelets and 13 final table appearances in the first 20 tournaments – there could be SOS calls (“Save Our Series”) going out to previous top performers Dave Ulliot and Barny Boatman.

And the Reason for the Failure is?

Like the England football team competing at Euro 2012, UK poker players have had their fair share of injuries. Rupert Elder (2 WSOP cashes in 2011) broke his leg playing football while Liv Boeree (8 WSOP cashes to date – 2 more at WSOPE) snapped a bone in her ankle doing back-somersaults in Vanessa Selbst´s garden. Sam Trickett (9 WSOP Cashes in three years including three final tables) has had some “personal issues” to resolve, while Jake Cody´s hot streak (3 WSOP cashes and a bracelet last year, plus a final table appearance at the WSOPE) has been limited to picking up women (according to LilDave Nicholson´s blog) with Chris Moorman, Tom Middleton and JP Kelly.

Better to Come? We Hope So!

Inasmuch as the UK poker players may have succumbed to the universal apathy which has surrounded the 43rd World Series of Poker (Hellmuth´s bracelet aside), possibly as the series develops – or Dave Ulliot arrives to put all the youngsters in their place (Chris Bjorin aside) – Team UK will perform better and make up for their dismal start to this year´s WSOP. Let´s hope so!