Lacay Makes a Splash on Day 2 of WPT Venice

Ludovic Lacay played a superb game of poker yesterday at the Casino di Venezia to take a commanding chip lead after Day 2 of the WPT Venice Main Event. 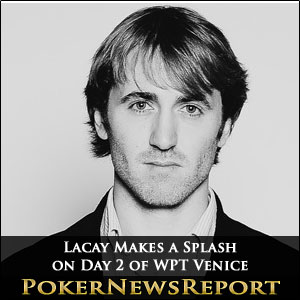 Ludovic Lacay played a superb game of poker yesterday at the Casino di Venezia to take a commanding chip lead after Day 2 of the WPT Venice Main Event.

The EPT San Remo winner – who was a re-entry on Day 1B after running into the Quad Fives of Mike Sexton on the opening day – played what he called “vintage 2009 Ludovic Lacay” poker to chip up from an opening stack of 118,000 chips to close the day more than 30 big blinds ahead of his closest rival on 351,000.

Such was Lacay´s good run throughout the day that a “vintage 2009 Ludovic Lacay” hand would consist of three-betting pre-flop with 95s – hitting two pairs on the flop and then filling up on the turn. Lacay used his growing confidence to increase the size of his three-bet aggression and force other players out of valuable pots.

Behind Ludovic Lacay, thirty-five players remain in the tournament – with only twenty-one of them going to cash. Day 1A chip leader, Stephen Behm (263,800 chips) remained closely in contention after flopping a straight to cripple Rocco Palumbo (Q♣ 10♥ > K♦ J♣), while Day 1B chip leader Fernando Cimaglia had a much quieter day – finishing with 200,400 chips, but still ahead of the average 144,000 chip stack.

Among those also more than likely to get into the money when play resumes in the WPT Venice Main Event are Lauri Pesonen, who chipped up quickly in the first level of the day due to a Kings > Queens encounter against Frederico Butteroni, and Giuseppe Pastura – who cracked Allessandro Fasolis´ A♠ A♣ in the last hand of the day when his A♦ Q♠ found four diamonds on the board to bust his compatriot in thirty-seventh position.

Others Still Swim for their Lives

Among those closer to the bottom of the leaderboard are Liv Boeree – who made a nice recovery after losing a slice of her stack in an early AK < AJ encounter to finish on 93,600 chips – Dan Cates (87,600 chips), Martin Stazsko (43,900 chips) and Matt Salsberg (100,100 chips) – who, when he was not card dead, seemed to always be splitting pots with his good hands.

Practically clinging to the gondola of safety by his fingertips is the charismatic Socrates Ioannides (28,500 chips), who won a 2,996-runner online Club WPT qualifier to get his seat in the WPT Venice Main Event. Before Day 2 started, the Albert Einstein lookalike admitted that he would need the poker gods to smile on him for him to make it through the day – and smile they did; with the WPT novice doubling up with 8♦ 5♦ > A♠ A♣ in the first level of the day and turning a wheel with AK > QQ in the last.