Former Sen. Jon Kyl’s retirement has left a void in Republican support for online poker legislation, prompting lawmakers to seek another to fill his shoes. 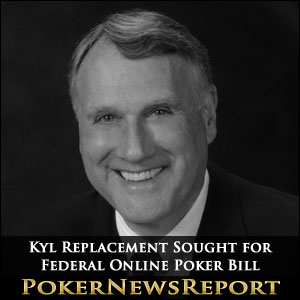 Former Sen. Jon Kyl’s retirement has left a void in Republican support for online poker legislation, prompting lawmakers to seek another to fill his shoes.

Kyl was instrumental in championing the cause last year along with Senate Majority Leader Harry Reid (D-NV), but the clock ran out on their Reid-Kyl proposal. Although the bill was never introduced in Congress, the former Arizona Republican’s support was seen as crucial because he was not representing a state such as New Jersey or Nevada where land-based gambling has been legal for decades.

In order for any federal online poker bill to advance, most agree that GOP sponsorship has to come from outside of Nevada or New Jersey so that the entire United States is represented. Kyl’s supportive role had been accomplishing that. But his retirement has caused online poker lobbyists to search for someone else to carry the torch.

That someone may turn out to be Rep. Peter King (R-NY), who will likely propose online gambling legislation in a matter of days, The Hill reported. It is not yet clear whether King’s proposal will be limited to poker-only. Rumors have circulated indicating that the King bill will include state lotteries in some fashion. The Reid-Kyl proposal was objected to strongly by the lotteries of some individual states and King may be attempting to appease their interests with his legislation.

The American Gaming Association would like to see a poker-only bill on the federal level and will reportedly reserve judgment on supporting King’s proposal after the measure has been introduced, said AGA president and CEO Frank Fahrenkopf. The AGA has been in discussions with a number of Republican senators in an attempt to persuade them to join in the fight to legalize online poker.

In the absence of legislation on the federal front, individual states continue considering online gambling regulations. The state-by-state patchwork of legislation is not an ideal solution, but it may be the only option if federal lawmakers cannot find common ground on the issue. Part of the reason why federal legislation has been so difficult to achieve is that Indian tribes, state lotteries, racetracks and casinos all have an interest in the outcome. Finding a solution to the online gambling issue that is satisfactory for each of those interest groups has thus far been an overwhelming task.