Kurt Jewell has taken down the World Series of Poker Circuit (WSOPC) Harrah’s Tunica $1,600 buy-in main event for $192,984 and a National Championship seat. 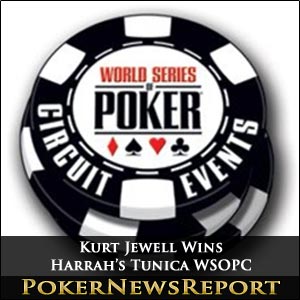 Jewell is certainly a star on the WSOPC, having now won three events during the series since April last year. This victory is also his biggest cash prize – and second overall – since collecting $242,909 for winning the $1,600 buy-in No-Limit Hold’em main event on the circuit’s Horseshoe Hammond stop back in late October of 2010.

The Frankfort player outlasted 646 other starters this time – up by 167 from last year – over three days’ play to ultimately defeat Tennessee’s Chris Thompson in their heads-up face-off to collect his second WSOPC main event crown.

The final day took nine hours to complete, but it was Jewell who emerged as champion – for a third gold ring – after seeing off Thompson when down to just two players.

We arrived at the final two when Houston’s Blakeman – as the short stack – failed to find the cards he needed for his A♥ 6♦ to overcome the J♠ J♣ of Jewell.

That exit left Jewell on 7.2 million chips going into his clash with Thompson, who took 5,665,000 into the head-to-head.

A fabulous battle ensued as the players exchanged the chip lead, before the final hand arrived with Jewell once more ahead.

Jewell was also determined and moved all-in, leaving Thompson to consider his options before eventually calling with 10♥ 10♣.

Jewell revealed his hole cards of Q♠ J♠ to be behind, but picked up a pair of jacks when the K♦ 7♣ J♥ arrived.

However, Thompson was thrilled to see the 10♦ on the turn that gave him trips – but was heartbroken when the 9♥ arrived on the river to complete Jewell’s straight for the title.

The first elimination of the last day arrived quickly, when short stack Michael ‘Carwash’ Schneider, of Georgia, hit the rail in 16th for $9,734.

At almost exactly the same time, Tennessee’s Houston White was being eliminated by Ludlow’s Bazeley in 10th place – for $14,516 – on the second table.

White had called a 52,000 raise, but was then forced into making a huge decision when small blind Bazeley three-bet to make it 175,000 to go.

But Bazeley made the call to reveal nines and dominate Houston’s sevens. The turn and river were no help to Houston and the bubble was burst to set up a nine-handed final table.

Ray Weaver Out in Ninth

Oxford’s McClusky sent Weaver to the rail in ninth about 30 minutes into the final table.

Weaver checked, but McClusky threw in 200,000 chips and was called by the former for the K♣ to arrive on the turn.

He again checked, while McClusky shoved all-in. Weaver called to show A♦ Q♣ and his opponent revealed the A♣ J♠ for two pair, although the former did have a straight draw, as well as a queen, to win.

But the 4s on the river was no good and Day 1a chip leader Weaver was off to collect his winnings.

McClusky, on the button, was eliminated in sixth soon after when his second successive all-in move failed against big blind Bazeley.

Bazeley showed A♥ A♦ to dominate McClusky’s K♦ J♦ and stayed in front for the knockout when the board ran 10♠ J♠ 2♥ Q♠ 4♠ to leave us with just five remaining players.

Gardner took his time, eyeing up Jewell, but then moved all-in for 1,440,000. His opponent considered what had gone before in the hand – even asking for a chip count – and then called to reveal K♣ Q♣.

He was up against Gardner’s dominating A♦ J♠, but the flop of 6♣ 10♠ J♣ flop gave Jewell an open-ended straight draw, as well as a flush draw, to leave the gathered railbirds on edge as they awaited the turn.

The 7♥ changed nothing, but the river card of A♥ handed Jewell a Broadway to leave a disappointed Gardner to shake his hand and walk off to collect his payout.

Jacob Bazeley Knocked Out by Jewell

Bazeley had flopped two pair, but required running nines to stay alive as Jewell had quad fours. He was already saying his farewells as the dealer placed the K♦ and the 8♠ to complete the board.

That took Jewell into the chip lead and he was able to finish off the job when knocking out Blakeman and then Thompson for the title.

Jewell didn’t just pick up a huge cash prize with his victory, though, as he is now in line to collect a World Series of Poker (WSOP) gold bracelet in May during the 43rd staging of the world’s biggest poker series in Las Vegas.

He will be joined by 99 other WSOPC players in the event – to be held at the Rio All-Suite Hotel & Casino – when all will be competing for the top prize of $1 million.

The WSPOC’s next stop kicks off tomorrow at the Palm Beach Kennel Club, where a $1,600 buy-in main event will be held at the Florida venue during the February 16 to 27 stay.