Mattias Kurschner was on top of the chip counts once again when Day 2 of Grand Live Prague came to an end after the thirty-six player money bubble burst. 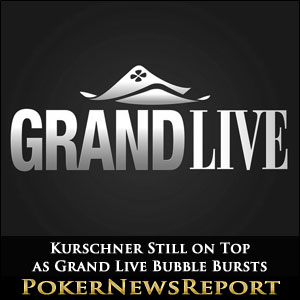 Mattias Kurschner was on top of the chip counts once again when Day 2 of Grand Live Prague came to an end after the thirty-six player money bubble burst.

Day 2 of the Grand Live Prague Main Event saw the surviving field of 106 reduced to just 36 – the number of players who will cash in the tournament. At the top of the leaderboard when the chips were bagged and tagged was German poker player Mattias Kurschner; who had entered Day 2 as chip leader and, other than a brief blip around the dinner break, pretty much remained at the head of the field throughout the day.

Behind Kurschner it was all change, as only four other players who entered Day 2 with chip stacks in the Top Ten survived the cruel twists and turns of fate at the Card Casino in Prague – none of whom featured in the Top Ten chip stacks (below) at the close of play. Instead, a whole new generation of contenders emerged – including one of the US´s most talented female players Amanda Musumeci, Blaz Svara, and Jukka Lappi.

For the benefit of anybody who has not heard of Amanda Musumeci, the US female poker player has a string of WSOP and WPT cashes in her résumé and a Borgata Poker Open Title. Musumeci jumped into this event after cashing in the Eureka Main Event across town, and made in clear on Day 2 that she was not in Prague just to do some sight-seeing.

It should be a fascinating battle between the three on the third day of the Grand Live Prague; however, the penultimate day of the tournament will be lacking two former GSOP/Grand Live Champions, who fell before the end of Day 2. Nikos Grammis, who won the GSOP Live in Malta last year, was eliminated in a flip against Michal Ozimek (A♠ 9♠ < 7♠ 7♣), while last year´s winner of the GSOP Prague – Matt Adams – was cruelly rivered by Anthony Picault´s Ace-Ten (> Ace-Jack) to sent the defending champion to the rail.

Svara Blazes Away – Jukka Laps it Up – Leonichev Bubbles

Blaz Svara had entered Day 2 of the Grand Live Prague with a healthy stack of 104,400 chips, but was not prepared to coast through the action. Having already lost half his chip stack during the first level of the day, Svara chipped back up in the second when he forced Emmanuel Rodrigues De Jesus out of the biggest pot of the tournament so far when shoving all-in in response to De Jesus´ river bet. Svara then finished off De Jesus A♠ K♣ > 9♥ 9♠ to move up among the chip leaders.

Finnish poker players have made their mark on the events to date in the Prague Winter Poker Festival, and Jukka Lappi enjoyed a good day to also finish among the chip leaders – busting Michael Donofrio out of the Grand Live Prague Main Event Queens > Nines, before taking out Mátyás Csiszár A♦ Q♠ > 7♥ 7♠ to start hand-for-hand play just before the bubble.

Several players risked their tournament lives of the fringe of the bubble and survived with healthier chip stacks to take into Day 3, but Serhii Leonichev was not one of them. Short-stacked Leonichev moved all-in from the button with A♥ 10♠ and was called by Kacper Pyzara A♦ Q♠. Both players paired their Ace on the window card A♣, but the board ran A♣ 8♠ 7♦ / J♠ / 6♥ for Pyzara´s better kicker to come into play, and for Serhii Leonichev to leave the Grand Live Prague as the bubble boy.

Looking Ahead to Day 3 of the Grand Live Prague

Day 3 of the Grand Live Prague Main Event will start with all the remaining thirty-six players assured of a €2,600 min-cash. When the cards are in the air at the Card Casino, blinds will be 2,500/5,000 (ante 500) – meaning that more than a third of the field will have less than twenty Big Blinds to play with. Play will continue until a final table of nine is set; with those most likely to be in contention for the €61,425 first prize including: