The 2014 Borgata Winter Poker Open Series started yesterday with a $2 million guaranteed NL Hold´em tournament that attracted over a thousand entries on Day 1A. 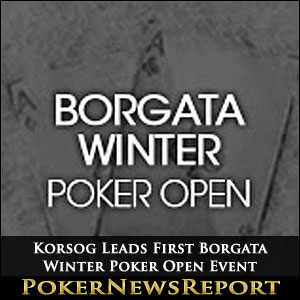 The 2014 Borgata Winter Poker Open Series started yesterday with a $2 million guaranteed NL Hold´em tournament that attracted over a thousand entries on Day 1A.

The Borgata Poker Open Series traditionally starts with a headline tournament and, for the 2014 Borgata Winter Open, the guarantee for the $560.00 buy-in Event #1 has been maintained at $2 million in light of a record-breaking opening event in last year´s Winter Open and the subsequent series throughout 2013 – including the Fall Open Series, in which Event #1 was won by Maksim Rozenfeld for $363,000.

Also, now that online poker is up and running in New Jersey, organisers are expecting that many more players will take the opportunity of qualifying online for the twenty-three events that are scheduled in the Winter Series, and yesterday those expectations were realised as 1,212 entries were received on Day 1A of Event #1 – the first of three opening flights.

The format of Event #1 is a little unusual inasmuch that unlimited re-entries are allowed for the first eight levels (sixteen 30-minute levels are played on each of the three opening flights), but players who survive an opening flight (Day 1A or Day 1B) with a relatively small stack also have the option of entering Day 1B or Day 1C and trying to accumulate a larger stack.

If a player should get through two opening flights, the smaller of the two chip stacks is forfeited, and the player continues with his largest pile of chips. With blinds starting at 2.500/5,000 (ante 500) on Day 2, this is an option that many players will consider – especially if they have won multiple entries to the tournament through online satellites.

Korsog Leads the Way on Day 1A

Despite the packed field, few of the regular “big” names showed up for the opening day of the 2014 Borgata Winter Poker Open Series. Many will still be on their way back from the PokerStars Caribbean Adventure and acclimatising to the New Jersey weather (currently 73ºF/24ºC in the Bahamas and 45ºF/7ºC in Atlantic City).

However, appearances were made by defending WPT Winter Poker Open Main Event Champion Andy Hwang, actor and poker enthusiast James Woods, and tournament veteran Men “The Master” Nguyen – all of whom bust before the close of play, and will have to re-enter today if they want to progress further in the event.

After a hectic Day 1A, on which only 212 players survived, Torrey Korsog from Maumee in Ohio bagged up 372,000 chips to hold a narrow lead over Johnson Nguyen and Roger Wellman – both of whom amassed 361,000 chips. As is usual with Borgata Poker Open events, Korsog collected a $2,000 bonus for being the chip leader at the end of the day, while Nguyen and Wellman shared the $1,000 runner-up prize.

Looking Ahead to Day 1B/1C

Something else which is a little unusual about the format of the Borgata Winter Poker Open Event #1 is that Day 1B and Day 1C are both being played on the same day. Flight 1B gets underway at 10.00am local time this morning, while flight 1C will start 7.00pm this evening and conclude around 4.00am on Thursday morning (not ideal for the noon start to Day 2).

Players chipping up the $560.00 buy-in for their 20,000 starting chips will be looking to emulate the performance of Torrey Korsog and build a stack in excess of 300,000 chips, but it should be pointed out that the average chip stack after yesterday´s action was 114,340 – good enough for just 23 big blinds when Day 2 of the Borgata Winter Poker Open Event #1 resumes on Thursday.

You can get a re-cap of all the action by following @PokerNewsReport on Twitter.