Konstantinos Meliopoulos won The Grand Live Main Event in Tallinn for €28,600 after overturning a 2:1 chip deficit in the heads-up climax against Gary Clarke. 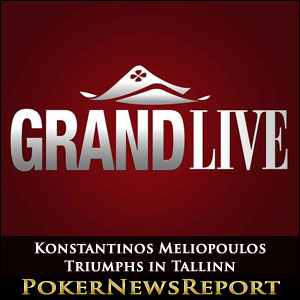 Konstantinos Meliopoulos won The Grand Live Main Event in Tallinn for €28,600 after overturning a 2:1 chip deficit in the heads-up climax against Gary Clarke.

The concluding day of The Grand Live Main Event in Tallinn saw one of the most engrossing final tables that the series has seen to date. The day started with eight of the nine chip stacks relatively closely matched for a final table – the shortest stacked player having twenty-five big blinds – and the only “stand-out stack” being that of chip leader Konstantinos Meliopoulos.

Meliopoulos had moved into the chip lead in the final hands of Day 3 – two pairs of Kings enabling him to knock out Mauri Dorbek and Indrek Raudkar in quick succession – but the Greek qualifier was not to enjoy an easy passage at the final table against his more experienced opponents.

Limonova Takes Over at the Top

Madis Muur continued to look dangerous for a while – flopping a set of Threes and getting three streets of value against Konstantinos Meliopoulos to chip up closer to the top of the leaderboard; but his stack was decimated by Kelly Limonova 5♦ 5♠ > K♦ Q♦ in a hand in which Muur paired his Queen on the flop, but Limonova hit a set of Fives.

Kelly Limonova then took the chip lead when flopping another set against Konstantinos Meliopoulos, while Madis Muur doubled up against Veli-Pekka Penttinen 9♦ 9♠ > A♦ K♣ to stay alive in the tournament as it moved into Level 20 with blinds increasing to 5,000/10,000 (ante 1,000).

Big Slick not so Good as Players Start to Tumble

After a level of play without an elimination, players started to hit the rail with increasing regularity. Jari Pekka Rattya failed to connect with the board when he was bust in eighth place by Gary Clarke 9♣ 9♥ > A♥ K♣, and Torsti Kettula followed soon after when his J♥ 8♦ failed to improve past Madis Muur´s A♦ 7♣.

Konstantinos Meliopoulos suffered a further blow to his chip stack when Veli-Pekka Penttinen rivered two pairs to crack Meliopoulos´ pocket Aces, but Meliopoulos got some of his chips back when forcing Madis Muur out of a big pre-flop pot, and then eliminated the Estonian player in sixth place A♥ Q♦ > K♣ Q♠ on the board of A♣ Q♣ J♦ / K♦ / 3♣.

It was proving not to be a good day to find Ace-King as an opening hand, and that theme continued when Dimitrios Ziogas doubled up against Konstantinos Meliopoulos 5♥ 5♠ > A♥ K♦, before Meliopoulos eliminated Ziogas in fifth place J♣ J♦ > A♥ K♣ – the third elimination of the day in which big slick was the departing players opening hand.

Kelly Limonova´s departure from the final table of The Grand Live Tallinn final table came in two consecutive hands. In the first she had laid down her cards under post-flop pressure from Konstantinos Meliopoulos in a 300,000 chip pot, and she then called Gary Clarke´s A♣ 10♣ shove with her own A♥ 8♥. Clarke´s hand improved to trip Tens and Limonova was bust in fourth place.

During the opening exchanges of the heads-up finale, Gary Clarke couldn’t buy a winning hand. Konstantinos Meliopoulos was picking up small pots for fun and moved level with Clarke when his 9♠ 7♠ rivered a pair of Nines to best Clarke´s K♠ 6♣. A flopped pair of Sevens moved Meliopoulos into the chip lead (9♣ 7♠ > A♥ 5♦) and he pressed home his advantage – reducing Clarke to 650,000 chips with some aggressive post-flop three-betting.

In the final hand Konstantinos Meliopoulos put Gary Clarke all-in with a pre-flop three-bet up to 600,000 chips. Clarke made the call and the cards were on their backs:

After such an engrossing final table, the flop and Turn were a bit of an anti-climax – J♥ 7♣ 5♣ / 2♣. Clarke needed a Three or a Four to survive, and although the River was a low card (2♦) it was not the one he needed and Konstantinos Meliopoulos had won The Grand Live in Tallinn for €28,600.