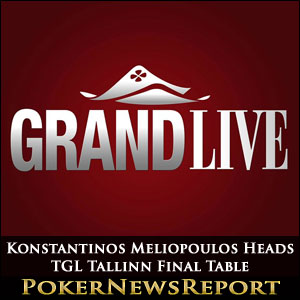 Yesterday´s Day 3 action at the Swissotel in Tallinn was a complete contrast to what had preceded it in The Grand Live Main Event; as, rather than ongoing battles raging across the card room, the play was subdued for much of the day.

Twenty-seven players returned to compete in Day 3 – the penultimate day of the event – with the money bubble still to burst. The game resumed in Level 12 (blinds 400/800 – ante 100) with the average chip stack being 40 big blinds, and the first elimination did not happen until Level 14 when Romans Bibiks was crippled by Mantas Urbonas´ rivered set of Nines and then bust by Torsti Kettula´s runner-runner trip Jacks.

As the blinds rose in Level 15 (now 1,500/3,000 – ante 300), more players hit the rail. Dimitris Koyrzis looked like he had found the right opportunity to double up with A♠ 10♦ against Torsti Kettula´s A♣ 8♣, but three clubs on the board elevated Kettula into the chip lead and signalled the Koyrzis´ elimination.

Jari Pekka Hurri took a chance that he would find something with A♠ Q♥ after the flop and Turn of 8♥ 5♥ 2♠ / 9♥, but the fourth heart failed to appear and he was bust by Dimitrios Ziogas´ turned Nine-high straight, before Torsti Kettula strengthened his place at the top of the leaderboard by eliminating Aleksandr Zabotin in nineteenth place A♣ K♠ > Q♦ J♣.

Two quick eliminations – Igor Toropov (9♦ 9♥ < Torsti Kettula´s A♣ K♥) and Mantas Urbonas (K♥ K♣ < Madis Muur´s A♠ J♣) – started hand-for-hand play; and it did not take long for the bubble to burst – Johan Palokangas moving all-in with Q♦ Q♣ and running into Indrek Raudkar´s K♠ K♦. The Kings held and the remaining fifteen players went off to the lunch break assured of a €2,250 min cash.

Konstantinos Meliopoulos Rises to the Top

Whatever Konstantinos Meliopoulos had for his lunch, it certainly did the trick! Having come back from the lunch break with a below-average chip stack of 139,000 chips and blinds of 2,000/4,000 (ante 500), Meliopoulos bust Ionnais Vogiatzoglou J♦ 10♠ > A♦ 8♦ after hitting the flop hard (Q♣ 8♣ 9♥) and making a Queen-high straight.

Konstantinos Loutrianakis suffered a bad beat to be bust in fourteenth place – Veli-Pekka Penttinen spiking a Seven to bust Loutrianakis A♥ 7♦ > A♦ K♥ – before Torsti Kettula flopped a set of Eights to eliminate Keimo Suominen in thirteenth place. Gary Clarke sealed his place at the final table when eliminating Thomas Meyer J♦ J♠ > 10♥ 10♠, but thereafter it was all about Konstantinos Meliopoulos.

We had written in yesterday´s PokerNewsReport that it would take something special to prevent a home victory in The Grand Live Tallinn Main Event, and Meliopoulos produced something special to take out two Estonian´s to set the final table. Meliopoulos (K♥ 7♥) flopped a pair of Kings to eliminate Day 2 chip leader Mauri Dorbek (A♣ 8♥) before pocket Kings enabled him to dispatch the dangerous Indrek Raudkar (A♦ 2♠) to the rail in tenth place and go into the final table as chip leader.

Looking ahead to The Grand Live Tallinn Final Table

When the nine remaining players take their seats at the Swissotel in Tallinn, there will be forty-three minutes remaining in Level 18 (blinds 3,000/6,000 – ante 500). Two Estonians remain at the final table – Madis Muur and Kelly Limonova – and an interesting seat draw sees Konstantinos Meliopoulos sandwiched between both of them!

Each of the players is assured of winning a minimum of €3,360, but with €28,600 up top – and the shortest-stacked players having 25 big blinds – you can be sure it will be a tense final table for The Grand Live Tallinn Main Event.