Greek player Konstantinos Gennaios outlasted a 20,000-plus field to secure the recent Game of Your Life event at online poker site PokerStars. 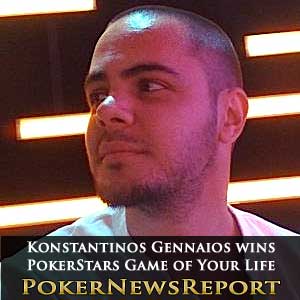 Greek player Konstantinos Gennaios outlasted a 20,000-plus field to secure the recent Game of Your Life event at online poker site PokerStars.

Gennaios, whose online poker name is Brave-83, certainly displayed a lot of courage to end up top of a very large pile to collect the top prize – a rather impressive sporting package of his choice worth $100,000.

The 27-year-old said “it was an unbelievable feeling” to make the final table, adding that – even with so many good players in opposition – he “was pretty confident” he “could take it down” – and that he “was meant to go all the way”.

An obviously thrilled Gennaios couldn’t quite believe “the magnitude” of his win, even though he has been playing for five years as he had only previously recorded “some four-digit pay days” when taking part in “micro and low stakes” events.

The native of Thessaloniki now faces a tough choice of which major sporting event – anywhere in the world – to take his family and friends.

The choice is almost endless, with major tennis tournaments such as the French Open and Wimbledon available, as well as Formula One Grands Prix, MLB baseball and much more on offer.

However, it appears the audio-video producer has already made up his mind, with a visit to the USA the most likely of destinations to watch his favourite basketball side, the Miami Heat, in action during the NBA play-off finals.

The Heat face the Dallas Mavericks starting this evening in Florida for the best-of-seven finals and, although Gennaios says he is “still considering what to do”, it seems likely he’ll “attend a game in the NBA Finals – accompanied by six or seven of my closest friends”.

The Greek player added that he hopes “it will give us a chance to watch LeBron [James] and [Dwayne] Wade take down their first championship together”.

He also stated that he has “always been a huge NBA fan”, so, after hearing of the promotion, he “immediately knew the NBA Finals would be my choice”.