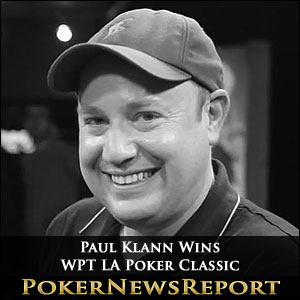 An epic conclusion to the WPT LA Poker Classic saw Canadian poker player Paul Klann last longest to take down the $1 million first prize – his first cash in a WPT Main Event at the fourth time of asking – after heads-up opponent, Paul Volpe, practically gave the event away with a disastrous shove in hand #202 of the final day.

The Players Take Their Seats …

At the start of the final table, a long drawn out climax could have been predicted. None of the six players to survive the previous five days of action had been noted for their aggressive approach and, had it not been for some hard luck stories throughout the day, the Main Event might still be running!

… And Lewis is First to Leave

Paul Klann regained the chip lead he had held until the final hand of Day 5 in the second hand of the day, when his K♥ K♠ made a one million chip hole in Danny Fuhs (8♣ 7♣) stack, but the majority of the early hands were settled by a player in position making a min-raise and everybody else around them folding.

The unfortunate exception was Toby Lewis, who moved all-in from the big blind with A♥ 10♥ and was called by the original min-raiser Danny Fuhs who was holding A♦ 9♦. Lewis was a 64% favourite to double up, but nobody told the dealer, who dealt a board of 9♣ 6♠ 6♣ / 6♦ / 5♠ to pair Fuhs´ 9♦ and eliminate Lewis in sixth.

With his chip stack returned to its original size at the start of play, Danny Fuhs became more active. A passage of play ninety minutes into the final day saw Fuhs win five uncontested hands out of seven and he took the chip lead when doubling up against Paul Volpe (5♣ 4♣ – missed flush draw) with 2♦ 2♠ which hit a set on the flop.

In comparison, David Fong had been one of the least active players at the table. Statistics after 60 hands showed that Fong had opened the betting less often than any of his opponents – however, when he did step up his aggressiveness on hand #94 it proved to be his downfall.

Danny Fuhs´ massive chip advantage was not to last long. Four hands after David Fong´s departure, Fuhs was again calling a pocket Queens shove with Big Slick (Fuhs A♦ K♠ – Jesse Yaginuma Q♥ Q♠), but this time Fuhs missed his outs and Yaginuma was able to double up. Yaginuma lost of a stack of his chips when both he (Q♣ J♣) and Paul Volpe (K♣ {10}♣) flopped club flushes, but he was soon digging back into Danny Fuhs´ pile of chips by shoving all-in whenever Fuhs min-raised.

After a further three hours, a big loss against Paul Volpe (A♣ Q♣ > A♠ 7♠) saw Danny Fuhs crippled and Volpe finished the job several hands later when calling Fuhs´ Q♣ 9♠ shove with K♦ J♥, and holding to bust the Fuhs out in fourth. Several hands later, Volpe was at it again – eliminating Jesse Yaginuma in third place (A♣ 10♠ > Q♣ J♠}) to take a 10.2 million -v- 5.2 million chip advantage into the heads-up against Paul Klann.

The Battle of the Pauls

Despite his 2:1 chip advantage, Paul Volpe was unable to wrap up the tournament quickly as, over the next dozen hands, Paul Klann chiselled his way back to level terms. Volpe took a massive chip advantage once again when hitting trip Deuces to cripple Klann down to 10 big blinds (Level 34 – 125,000/250,000), but Klann immediately doubled back (A♥ J♥ > 10♥ 9♦) before chipping back up to once again have the two players on practically identical chip stacks.

After almost seven and a half hours at the table and 202 hands, Paul Volpe had a moment of madness. Moving all-in with an unnecessary large bet of 8 million chips, Volpe (J♥ 9♥) was called by Klann (K♣ 10♦) and both players watched as the community cards helped neither of their hands. Volpe shoved his final two big blinds into the middle on the next hand, but his 10♥ 9♠ failed to improve and, with Q♥ 5♥, Paul Klann had become the WPT LA Poker Classic Champion.