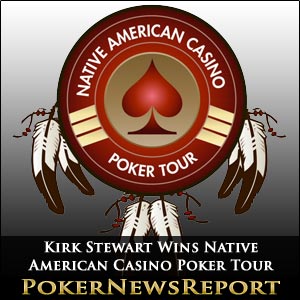 Kansas farmer Kirk Stewart lifted the first ever Native American Casino Poker Tour trophy at the Choctaw Casino Resort in Durant, Oklahoma, to pick up $50,000 in prize money and also a seat worth $1,500 for the World Series of Poker Circuit (WSOPC).

Vise and Simon shared the remaining prize money for approximately $45,000 each.

The final table of the 324-player event – which created a $290,681 prize pool – took an age to complete, mainly because of the deep structure of the tournament, and that was the reason behind the three-player arrangement.

With all the players appearing worn out, Stewart was still able to produce a glowing smile following his success and promised that the majority of his winnings would be pumped into his farm, although he did add that he would also make sure he saved some bucks to play poker games.

Incredibly, the farmer only began playing poker three years ago – discovering the world’s greatest game soon after his mother died – but did not allow his inexperience to stifle his play.

The key hand of the day for Stewart was undoubtedly the one he won against 10th place finisher Seneca Easley.

Easley was all-in to create a huge pot, but Stewart called him following the J-J-2 flop. Easley showed tens, while Stewart revealed A-K, before an ace arrived on the turn to give the 57-year-old the pot and propel him to tournament glory.

Only former World Poker Tour (WPT) winner Carter made the second day, along with 49 others, but failed to make the top 10.

Vaughn is probably the best-known face from those players, the 23-year-old pro from Fort Worth in Texas had an impressive backer at the event in Ben Lamb, but, although holding one of the biggest stacks after Day 1, was unable to follow through on Day 2 to exit earlier than he would have hoped.