There might still be 10 days until we reach July 1, but it certainly felt like Canada Day in Las Vegas last night as three of the top four finishers in the World Series of Poker (WSOP)’s $1,500 no-limit hold’em event hailed from north of the USA. 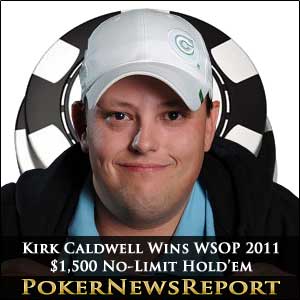 There might still be 10 days until we reach July 1, but it certainly felt like Canada Day in Las Vegas last night as three of the top four finishers in the World Series of Poker (WSOP)’s $1,500 No-Limit Hold’em event hailed from north of the USA.

Ontario’s Kirk Caldwell outlasted 2,827 other competitors to emerge as the event winner by beating Texas-based Ben White in their heads-up clash to leave with a gold bracelet and $668,276 in prize money following three days’ play.

All the $1,500 buy-in tournaments make for an interesting investment with fields regularly among the largest at the Rio All-Suite Hotel & Casino.

However, with so many entrants in the Amazon Room, there are always big-name casualties every day, with players such as Allen Cunningham, Joe Cada, Phil Laak, Randy Lew, Jerry Yang, Zachary Gruneberg and Tom Dwan crashing out on day one, while Adam Lippert emerged as the front-runner on 144,800 as chip leader.

Only 362 – or just under 13% – of the field returned for day two, but that was as far as Eddie Blumenthal, Brett Jungblut, Layne Flack, TJ Cloutier and Chino Rheem got as they hit the rail without cashing.

Ultimately, 35 entrants made the final day with their sights firmly fixed on the gold bracelet from a $4,242,000 prize pool.

Day three was thrilling as those 35 were reduced to just nine in less than five hours – and, incredibly, the final table seemed even more urgent as chips flew every which way.

We had our last four within 40 minutes as four eliminations arrived within the first six hands of the final table. American Randy Haddox finished in sixth for $114,304, while Brazilian Rodrigo Portaleoni ($85,556) went out in seventh, Tennessee’s Kyle Cartwright ($64,788) finished eighth and Martin Stevens, of Colorado, ended his tournament in ninth for $49,631.

However, four-handed play was much more considered as the table calmed down. Caldwell and fellow Canuck Mark McLaughlin led for the majority of the play – with the latter sending housemate Gabriel Houle ($211,353) out in fourth place.

Caldwell took to a massive pot against McLaughlin when three-handed as the former’s Jh-9h beat the latter’s Kh-5h on a 2h-3h-9c flop. McLaughlin did stage something of a comeback thereafter, but never really challenged again as heads-up play arrived to see Caldwell take on White.

White called with his Ac-Qs to be faced by Caldwell’s 8c-8h. Caldwell left his chair to stroll away from the table to join his supporters at the rail, before the flop came 7h-9d-9h.

The Jc on the turn proved an interesting card as, although it didn’t put White in front, it did give him three more outs to a jack.

However, the 8s spiked on the river and Caldwell finally showed some emotion as he threw his hands into the air following his victory. White banked $414,918 for his runners-up spot.