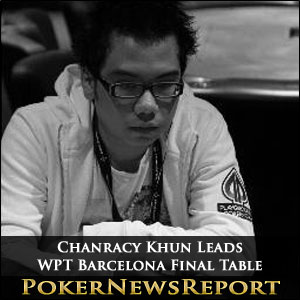 Khun had started Day 4 of the WPT Barcelona Main Event second in chips to runaway leader Sergio Fernandez, but after Fernandez had his increased his advantage with the early elimination of Nikola Ivancic (8♠ 7♠ > A♠ K♦ – Fernandez pairing his Seven on the river), Khun doubled up in dramatic fashion against Fernandez A♠ K♥ > K♦ K♣ when hitting the A♥ on the flop.

However, Khun´s chip supremacy did not result in an easy day for the Canadian. Being the chip leader often makes you a target for short-stacked players and Khun lost the chip lead to Ben Pollack when being forced out of the biggest pot of the day before doubling up Bruno Garcia Cortelo (10♣ 10♦ > K♣ Q♣). It was only when Khun (A♦ J♥) flopped a Jack to bust Alvero Ballesteros (9♥ 9♠) in the final hand of Day 4 that Chanracy Khun regained the chip advantage.

Pollack and Hassini in the Ascendancy

Ben Pollak rise into a challenging position started mid-way through the day. During level 21 (blinds 6,000/12,000 – ante 2,000) Pollack had squeezed Tahiri Hassani and Mario Sanchez out of a pot with a 119,000 pre-flop bet, but faced an all-in shove from David Konstandoff for more than ½ million chips. Pollack dwelt before making the call, but was then relieved to see that he was ahead in a Q♦ Q♣ -v- 8♣ 8♦ race – one which was all over as a contest when the Q♥ was dealt on the flop.

Tahiri Hassani produced a late pair of eliminations to become a factor in the WPT Barcelona Main Event. Chipping up to over a million chips when busting Mario Sanchez in ninth position (A♠ K♥ > A♥ 10♣), he then sent Paul Testud to the rail in eighth place (K♥ K♠ > A♥ Q♠) when managing to avoid an Ace among the community cards. Hassani finished the day in third, with a big chip difference between the top three and bottom three players remaining in the tournament.

The Final Table is Completed by …

Bruno Garcia Cortelo spent the day picking his spots carefully. In addition to doubling up against Chanracy Khun (above), he also doubled up against Tahiri Hassani (AQ > A10) and, should the right opportunity present itself early in the day, could be a factor when the WPT Barcelona Main Event reaches its conclusion today.

Sergio Fernandez sits in fifth position after his disastrous start to Day 4. The Bwin online qualifier finished the day on less than half the chip stack he started with despite the elimination of Erich Kollmann (AQ > 99), but still has more than double the chips of the short-stack on the final table – Antonio Alfaia – who bottled a call against Alvaro Ballesteros when the table was eight-handed and after Alfaia had already committed more than 100,000 chips to the pot.