Chanracy Khun became the latest member of the World Poker Tour Champions Club after eliminating all his opponents on the final table of the WPT Barcelona. 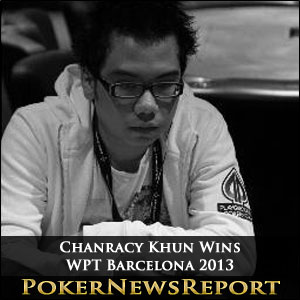 Chanracy Khun became the latest member of the World Poker Tour Champions Club after eliminating all his opponents on the final table of the WPT Barcelona.

Khun´s victory emulated the WPT Barcelona Main Event from two years ago, when Lukas Berglund triumphed in the six-handed finale by busting the rest of the table and, like Berglund, Khun admitted that it is “easy to win when you get all the luck”.

Unlike Berglund – who started in fourth in chips on the final table of WPT Barcelona in 2011 – Chanracy Khun came to the climax of the Main Event as the chip leader after eliminating Alvero Ballesteros in the final hand of Day 4.

Alfaia Fast Out the Blocks

The great chip divide between the top three players and bottom three players started to close from the beginning of the final table. With a few minutes left of Level 22 (blinds of 8,000/16,000 – ante 2,000) Antonio Alfaia got no response when he shoved in the very first hand, but Sergio Fernandez and Bruno Garcia Cortelo each chipped up when got three streets of value from Tahiri Hassani in hands at the start of Level 23.

With Hassini playing so loose, it was inevitable that he would either eliminate or double up somebody soon and, unfortunately for the Moroccan, it was the latter. On a flop of K♦ 3♣ 2♦, Alfaia moved all-in with K♠ 10♦. Hassini made the call with K♥ 6♠, but was reduced to the final table short stack when the turn Q♠ and river 4♥ failed to improve his hand.

Fernandez and Cortelo First to Bust

Hassani´s eagerness to be involved in every hand meant that any player with good cards was willing to take him on. This paid dividends for the Moroccan, as he took chips from both Chanracy Khun and Ben Pollak throughout Level 24, and whereas it would have been no surprise to see Hassani leave the table quickly, it was actually Sergio Fernandez and Bruno Garcia Cortelo who were to bust first – in consecutive hands.

Runaway Day 3 chip leader, Sergio Fernandez had a massive home support behind him but, for all their willing, his A♣ 9♥ could not improve against the 6♣ 6♦ of Chanracy Khun after Fernandez shoved pre-flop, and he was out in sixth. The other half of the Spanish support vanished following the next hand, in which Bruno Garcia Cortelo – who had carefully picked his spots to survive Day 4 – shoved his A♥ 6♦ into Khun´s A♠ 9♠ with the Canadian going on to make a Full House Nines over Aces.

Throughout the next two Levels the fortunes of each of the players varied incredibly due to the loose nature of Tahiri Hassani´s bet selection. Ultimately his “aggression” was to prove his downfall – shoving all-in from the Big Blind with A♥ 6♠ and being called by Chanracy Khun (K♥ 10♥), who flopped a straight – one of the “lucky hands” he mentioned in his post-victory interview – to seal the Moroccan´s fate.

Another “lucky hand” saw the demise of Antonio Alfaia several hands later. Alfaia (9♥ 9♣) moved all-in from the Small Blind for his last 890,000 chips and Khun (A♦ 5♥) made the call from the Big Blind. Alfaia was looking good to double up after the flop and turn blanked for Khun, but the A♠ on the river eliminated Alfaia in third and gave Chanracy Khun a 5,840,000 -v- 1,630,000 chip advantage over Ben Pollak going into the heads-up.

Ben Pollak gave it his best shot in the climax to the WPT Barcelona Main Event, but the luck was flowing with Chanracy Khun. The Frenchman took a stack of chips in an A♣ J♦ > J♥ 8♣ encounter a few hands into the heads-up, but was forced to lay down his hands frequently thereafter as Khun applied the pressure with pre-flop shoves and sizeable post-flop continuation bets. Eventually, Pollak was forced into adopting a shove or fold policy. Twice he shoved without getting a call from Khun, but the next time it proved to be third time lucky – for Chanracy Khun!

Khun (8♣ 8♥) opened from the button, Ben Pollak (K♦ 7♦) moved all-in and Khun called. Khun was ahead when the cards were on their backs, but had only a 50.10% of success after the A♦ 9♦ 9♠ were dealt on the flop. Pollak needed an Ace, a King or a Diamond for a valuable double-up, but Khun´s luck was not about to abandon him now, and the J♠ on the turn and 7♣ on the river gave the Canadian his first WPT Main Event title.