An outstanding bluff helped Kevin Saul to come from behind in the Borgata Poker Open Heads-Up Event #16 and snatch victory from an unlucky David Paredes. 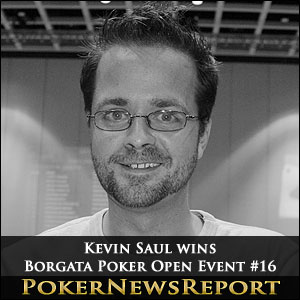 Event #16 of the Borgata Poker Open was a two-day Heads-Up bounty tournament for which 64 players paid the $1,500 + $150.00 buy-in plus an extra $500.00 for their bounty. Four former Borgata heads-up winners entered the event – none of whom cashed – and the field also included Will “The Thrill” Failla, 2005 WSOP runner-up Steve Dannenmann and the highest GPI ranked woman to being competing at the Borgata Poker Open, Amanda Musumeci.

Three preliminary rounds of heads-up matches were played on Day 1, with the eight remaining players returning to do battle on Day 2 – each assured of a min-cash of $4,656, plus the $500 bounties they would collect for progressing to the semi-finals and the finals. Straight sets wins for Kevin Saul and David Paredes saw them safely through to the semi-finals, but Jeff Coon found it difficult to shake off Matt Rock, while Jeff Gross overturned a 1-0 deficit to beat Mike Linster.

In the semi-finals of the Borgata Poker Open Heads-UP Event #16, David Paredes recorded his fifth straight 2-0 win in the event to earn his place in the final. His opponent was in the balance for some time, as Jeff Coon won the first of the best-of-three games against Kevin Saul – only for Saul to fight back and level the series of games, before taking down the deciding rubber.

Round 1 of the heads-up final went to David Paredes, after both players had survived flips during the game. On the third occasion that all the chips were in the middle, Kevin Saul (A-9) was the player at risk against Paredes´ pocket Eights. The pair held and Paredes took a 1-0 advantage in the climax of the event.

Kevin Saul levelled the match in the next game, courtesy of an outstanding bluff with his tournament life at stake. On a board of 10♠ 5♠ 3♥ / K♥ / 9♥ Saul (J-8) moved all in – forcing a considered fold from Paredes and leaving him short-stacked in the game. Saul went on to win the match in a K♣ Q♣ > 10♥ 10♣ hand, but admitted afterwards that the bluff was the pivotal hand that turned the match in his favour.

The final match of the heads-up event was a drawn out battle – with many of the hands being taken unseen due to some aggressive pre-flop and post flop betting. Eventually Kevin Saul´s opening bet of 600 chips was raised by Paredes (to 1,700) and Kevin Saul moved all in with K♦ Q♦. David Paredes (9♥ 9♦) made the call, and was looking good for a valuable double-up on the board of J♦ 8♥ J♥ / 4♥, but the K♠ spiked on the River to give Kevin Saul victory in the Borgata Poker Open Heads-Up Event #16.