There was a dramatic climax to the UKIPT Dublin Main Event yesterday – with winner Kevin Killeen surviving four times when his tournament life was at risk. 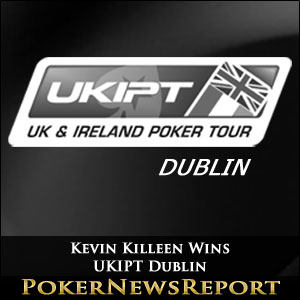 There was a dramatic climax to the UKIPT Dublin Main Event yesterday – with winner Kevin Killeen surviving four times when his tournament life was at risk.

The UKIPT Dublin Main Event has thrown up some sensational finishes in the past, but none more dramatic than the one which involved Kevin Killeen and Max Silver in the historic Round Room at the Mansion House in Dublin yesterday.

Killeen had taken a substantial chip advantage to the final table of the €770.00 buy-in Main Event due to going on a roll towards the end of Day 3 and busting out Michael Naughton in eleventh place and Declan Barker in tenth; but he faced a strong challenge from his seven opponents at the final table – not least from former UKIPT Dublin Champions, Joeri Zandvliet and Max Silver.

When play resumed at the final table of the UKIPT Dublin, blinds were already 20,000/40,000 (ante 5,000), and it did not take long before a couple of players left the tournament. Ivan Tononi was the first to depart in the third hand of the day – moving all-in from the cut-off with J♠ 8♦, and getting a call from Robert Sturman in the Small Blind with Q♥ Q♦. The red Queens held, and Tononi was bust in eighth.

Larry Ryan´s elimination was less straightforward. Ryan moved all-in after all five community cards had been dealt (7♥ J♣ K♥ / J♦ / Q♣) and rolled over 10♣ 9♦ for a rivered King-high straight. Unfortunately for Ryan, the Q♣ on the River had made Kevin Killeen (Q♠ Q♦) a Full House, and Ryan was sent to the rail in seventh place.

Silver Goes on a Heater and Takes Control

On Day 1B of the UKIPT Dublin Main Event, Max Silver broke the record for the largest stack of chips ever amassed during an opening flight of a UKIPT event (311,700), prompting one player to say “We might as well give him the trophy and play for second place,” and as the game progressed, it looked like that prophecy might be coming true.

Silver moved into a big chip lead when his 4♥ 4♠ flopped a set and he got three streets of value against Kevin Killeen to relieve the former chip leader of 1.395 million chips. Silver then eliminated Joeri Zandvliet in sixth place 7♦ 7♠ > K♦ 7♥ and Dirk Thijssen in fifth place 8♥ 9♥ > K♥ 10♠, and was still at the head of the leaderboard after doubling up Christopher Wood 5♠ 4♠ (rivered a gutshot straight) > J♠ 8♣.

Wood Busts Sturman then Busts Himself, and Silver Leads into Heads-Up

Robert Sturman won his package to the UKIPT Dublin Main Event in an £8.00 qualifier, so he will not be disappointed with his fourth place finish, despite the manner in which he was eliminated. Sturman moved all-in from the button with 10♠ 10♦ and got a call from Christopher Woods (A♠ 9♥). The window card (A♥) put Wood ahead in the hand and there was no Ten in the rest of the community cards to save Sturman from elimination.

Christopher Wood´s enhanced chip stack was to last just three more hands after he shoved with 7♦ 6♦ in response to Kevin Killeen´s pre-flop three-bet with K♠ Q♦. Killeen made the call and the board delivered 10♥ A♦ Q♠ / J♠ / 5♦ to make an Ace-high straight for Killeen and send Wood to the rail in third – leaving Max Silver with an 8.355 million -v- 5 million chip advantage going into the heads-up.

Every Time Silver Storms Ahead, Killeen Doubles Back

The heads-up of the UKIPT Dublin Main Event could have been wrapped up in the first few hands after Max Silver quickly developed a 3:1 chip advantage, and then called Killeen´s 9♥ 9♦ shove with K♠ Q♣. Unfortunately for Silver board ran Ten-high and Killeen was back on level terms; however the parity between the two players was not to last long as Max Silver again took a massive chip lead with a Turned Full House – only for Killeen to double back into contention Q♠ 7♣ > K♠ 3♠ after the chips went in on a Queen-high flop with two Spades, and Silver missed his flush draw.

The pattern of play continued like this through the next level; Max Silver building up a substantial chip lead, and Kevin Killeen twice more doubling up into contention – the first time massively against the odds when Killeen hit a pair with 8♥ 9♠ against Silver´s J♠ 10♦. The second double up was more conventional (A♦ K♣ > 7♦ 6♣), and Kevin Killeen moved into the chip lead for the first time when his A♥ 5♦ hit a Broadway straight on the Turn to take down a 3 million chip pot.

The concluding hand followed shortly after Kevin Killeen had forced Max Silver out of a two million chip pot to develop a 2:1 chip lead. Killeen and Silver got involved in a pre-flop raising war, which concluded with Killeen calling Silver´s four million chip shove.

The flop of 6♦ 4♥ 2♣ did not help Silver and, after the Turn of 3♠, he commented that he would be happy with a chop. Unfortunately for Silver, the A♦ was dealt on the River, and Kevin Killeen was UKIPT Main Event Champion after an eventful and dramatic heads-up.