Keven Stammen got a lot of help from Aces falling on the River to capture the largest live poker cash of his prolific career in the WPT World Championship. 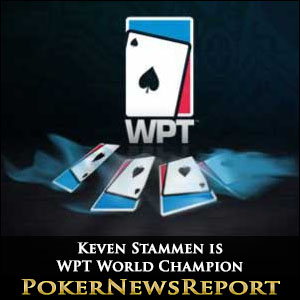 Keven Stammen got a lot of help from Aces falling on the River to capture the largest live poker cash of his prolific career in the WPT World Championship.

Season XII of the World Poker Tour came to an exciting conclusion at the stroke of midnight on Saturday night, when Keven Stammen spiked an Ace in the final hand of the WPT World Champion to defeat Byron Kaverman and capture the $1,350,000 first prize.

Aces falling on the River were a feature of the final table – especially for Stammen – who had gone into the final table of the WPT World Championship with a narrow chip advantage over Byron Kaverman after going on a roll during the penultimate day of the event.

Korotki and Kohlberg Bust as Aces Help out Stammen

When play got underway at the Borgata Casino, Hotel and Spa, the six remaining players were entering Level 25 (blinds 25,000/50,000 – ante 5,000), and there was drama in only the ninth hand of the final table when Ryan D´Angelo rivered a set of Kings to double up against Abe Koroti´s (A♠ Q♠) paired Ace. Korotki was able to hang on until the end of the level, but was dispatched the rail in sixth place at the beginning of Level 26 when his A♣ 7♠ failed to improve past D´Angelo´s A♠ J♠.

During the early levels of play Keven Stammen put his chip advantage to good use. He took a massive pot against Ryan D´Angelo K♥ 10♥ > A♦ 10♣ when the A♥ on the River completed his nut flush. A second Ace-high flush enabled him to take another big pot from D´Angelo, and it was third time unlucky for D´Angelo when the A♠ spiked on the river to give Keven Stammen a better two pairs than his opponent and for Stammen to chip up beyond the 9 million mark.

D´Angelo and Dunst were eliminated within five hands of each other – D´Angelo optimistically shoving into Byron Kaverman´s big blind with 9♠ 5♣, and failing to improve past Kaverman´s Q♠ 2♣ – while Tony Dunst looked like he had found a good opportunity to double up with A♣ 2♥ against Keven Stammen´s K♥ 6♥, but the K♣ on the flop and K♠ on the Turn put an end to his tournament life and he was bust in third place.

Going into the Heads-up, Keven Stammen had a 10.905 million -v- 5.505 million chip advantage against Byron Kaverman (blinds now 60,000/120,000 – ante 20,000), but incredibly Kaverman drew level in a 6 million chip pot in which his K♦ 10♦ made a better two pair then Stammens. The chip lead flip-flopped for a few hands before Stammen once again asserted, and victory in a 4 million chip pot with trip Fours gave Stammen a 3:1 chip advantage over his opponent.

Kaverman was looking good for a double up after the flop and Turn of Q♥ 9♣ 6♠ / 3♥, but the A♥ spiked on the River to give Keven Stammen top pair and victory in the WPT World Championship.