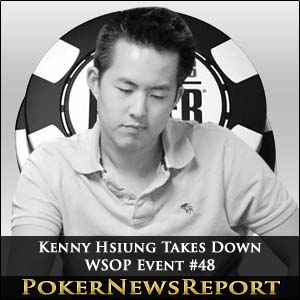 Hsiung started his heads-up encounter with Hwang holding a massive chip lead of 1,725,000 over 500,000, although the latter battled back to even up the match as the next two hours saw the lead exchanged numerous times – before Hsiung started to pull away.

The final hand saw Hsiung, on the button, raise and Hwang call to see of a flop of J♦ 7♥ 8♣. Hwang then checked, Hsiung made a bet and Hwang raised. Hsiung then re-raised and Hwang made the call to see the Q♥ arrive as the turn.

That’s when the rest of the chips hit the middle of the table as Hwang showed 6♠ 5♥ for an open-ended straight draw, while Hsiung revealed K♣ 9♣ for a king high. The Q♣ river paired the board to ensure that Hsiung was crowned the champion and Hwang picked up $102,118 as runner-up.

Paul Berende, of the Netherlands, started the day as chip leader, while Hsiung, John Virtue and Cary Marshall were close by. However, Alaska’s Marshall failed to make the final table, falling in 13th place for $9,272.

Shchmelev and Bonomo were eliminated pretty quickly, but play slowed down somewhat thereafter – only for the survivors to be chopped back from 18 to 11 within an hour of level 19 starting. Then, just six minutes into level 20, the nine-handed final table had been reached when Arizona’s Jason Manger exited in 10th place for $11,780.

California’s Stephen Hung was the first to leave the final table in ninth place for $15,098 when his ace-ten lost out to the pocket nines of Mitchell Davis on a board of K♠ 7♥ 3♦ K♥ 9♠.

John Myung Out in Eighth

John Myung, of Virginia, was the next to hit the rail in eighth place for $19,474, followed by the initial final table chip leader, Davis, in seventh for $25,266. California’s Davis had taken a few hits to his stack – including a massive pot to Dwyte Pilgrim – before busting out to new chip leader Hsiung.

Matthew Woodward, of Maine, and Brooklyn’s Pilgrim were next to hit the rail in sixth and fifth respectively for $32,994 and $43,345. Guyana-born Pilgrim, who had been as low as just a single big blind on Day 2, managed to climb into the chip lead during the final table but bust out to Berende.

The Dutch player was still short-stacked, however, and just couldn’t get going when play became four-handed, with Hwang sending him to the rail in fourth place for $57,310.

Hsiung started to move away just as California’s John Virtue began to sink, with the latter being left crippled after Hsiung turned a flush to beat the flopped set of Virtue. The next hand saw Virtue eliminated in third for $76,244.

Day 2 had seen 126 players take their seats in the Rio, with Jesse Martin, of Massachusetts, burst the bubble in 28th place after hand-for-hand play lasted 80 minutes or 24 hands.