Bubble-bursting Kenny Hicks goes into the penultimate day of the EPT Monaco Main Event with a significant chip advantage over his sixteen remaining opponents. 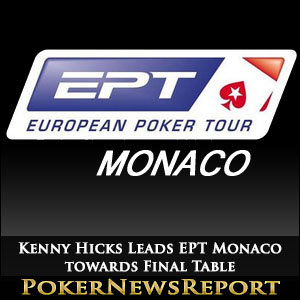 Bubble-bursting Kenny Hicks goes into the penultimate day of the EPT Monaco Main Event with a significant chip advantage over his sixteen remaining opponents.

Kenny Hicks – the player who was responsible for bursting the bubble on Day 3 of the EPT Monaco Main Event – leads the seventeen remaining players in the Grand Final, which will today play down to a final table of eight.

Hicks benefitted from a fortunate hand towards the end of the day to bag up 2,499,000 chips after five levels of play, and his advantage over second-placed Martins Seilis (1,767,000 chips) and Jack Salter (1,750,000 chips) is equivalent to slightly more than twenty-four big blinds.

Forty-one players returned to the Monte Carlo Bay Hotel for Day 4 of the EPT Monaco Main Event, each knowing that they were assured of a €24,400 pay-day, but each keen to better their chances of taking down the €1,240,000 first prize.

For players such as David Cowling (bust Q♦ 10♣ > K♦ 5♦ by Idris Ambraisse) and Morten Klein (bust Q♣ Q♦ > A♦ 5♣ by Ivan Soshnikov), their participation in the tournament was over within the first few hands of the day; but for the second shortest-stacked player at the start of play – Jack Salter – Day 4 of the EPT Monaco Main Event will be one he never forgets.

Salter Gets Stacked with Early Double-Ups

Salter crippled Day 2 chip leader Vladimir Troyanovskiy when his pocket Aces held against Troyanovskiy´s A♥ 10♠, before turning a Full House with Kings > Queens to half Eros Nastasi´s chip stack and temporarily take the chip lead, before doubling-up Mark Teltscher A♥ 8♣ > K♦ 9♦ to finish the day in a very satisfactory third place.

Seilis and Hicks Get Lucky to Take Chip Lead

Either side of Jack Salter´s temporary chip lead, two players enjoyed sensational good fortune to head the EPT Monaco Main Event. Martins Seilis (Q♦ J♥) was a mile behind Christoph Vogelsang (A♦ Q♠) when the two players got into a pre-flop raising war which saw Vogelsang all-in, but the flop of 8♦ 9♦ 10♣ could not have been better for Seilis, and his Queen-high straight held through the Turn (9♣) and River (2♣) to eliminate the German in twenty-fifth place.

Soon after, the hand that took Kenny Hicks into the chip lead occurred – Hicks looking in trouble with 1.3 million chips on the table and a pair of Jacks against Conor Shelly´s K♦ K♣; but the J♠ on the flop gave him a set to eliminate Shelly in eighteenth place and move Kenny Hicks up to the top of the EPT Monaco leaderboard.

Looking Ahead to Day 5 of the EPT Monaco Main Event

The penultimate day of the EPT Monaco Main Event looks to be a fascinating one. When the seventeen remaining players take their seats, they will be entering Level 25 (blinds 15,000/30,000 – ante 3,000) with five of the players having fewer than 25 Big Blinds.

An intriguing seating draw sees the well-stacked Nikita Nikolaev sandwiched between Kenny Hicks and Jack Salter (Salter having position), while on Table 1 Martins Seilis is sandwiched between Antonio Buonanno and the dangerous Sebastian Von Toperczer – who also has the best seat of the three.

Play is scheduled to continue until tomorrow´s eight-handed final table is set, by which time we will have a better idea of who is going to be the EPT Grand Final Champion: