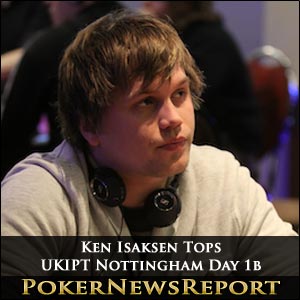 Norwegian Ken Stean Isaksen topped the Day 1b standings of the PokerStars UK and Ireland Poker Tour (UKIPT) Nottingham main event at the famous Dusk Till Dawn venue in the East Midlands as just 123 players survived the second of three opening-day streams in the £1 million guaranteed tournament.

Incredibly, that makes a total of 1,090 competitors, even before today’s Day 1c starts – and, with the third opening-day stream already fully subscribed, the huge £1 million guarantee has already been reached.

That is, of course, good news for every player still in the tournament after another 11 levels of 60 minutes were completed last night, with PokerStars player Isaksen leading the way on 227,600 chips – just 31,400 ahead of second-placed Englishman Jack McDermott.

However, the Norwegian definitely won’t begin tomorrow’s Day 2 as chip leader – even ahead of today’s play – following the charge made by English player Marcin Milde on Wednesday that saw him end Day 1a on 278,700 chips.

However, experienced English pro Surinder Sunar did make it through Day 1b, although he ended the day down in 47th place on 73,600 chips.

Top 10 Chip Counts from Day 1b of UKIPT Nottingham