Ken Demlakian took advantage of a slow day in Queenstown to finish Day 1B of the APPT Snowfest with the biggest chip mountain. 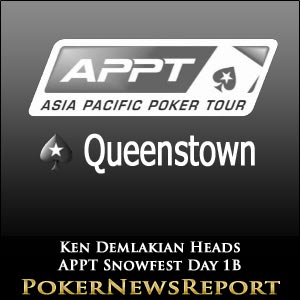 Ken Demlakian took advantage of a slow day in Queenstown to finish Day 1B of the APPT Snowfest with the biggest chip mountain.

It was cold outside the SkyCity Casino in Queenstown yesterday (and it is getting colder as the weekend approaches) and possibly this was the reason that there was not one elimination from Day 1B of the APPT Snowfest Main Event during a three hour period – nobody wanted to leave!

From the 49 players that took their seats at the start of the day, only eighteen failed to survive the six levels of play – the most notable being Tom “Tollgate” Grigg who finished sixth in this event last year and who was grabbing much of the limelight with his aggressive style of play until his A-Q shove failed to connect against pocket Kings.

While many people´s focus was on the weather and the fortunes of the more established Australasian poker players, Ken Demlakian  rose from his “place in the pack” to end Day 1B with the most substantial mountain of chips – although not sufficient to take the overall lead which is still in the hands of Day 1A chip leader Dave Allan.

Actually placed in sixth overall behind five well-stacked contenders from Day 1A, Demlakian should take encouragement from the fact that last year´s Day 1B chip leader, Marcel Schreiner, went on to take victory in the APPT Snowfest Main Event after having a significantly smaller stack than the Day 1A leader and a remarkably similar chip stack (Demlakian has 70,750 chips – Schreiner had 72,600).

With one more Day 1 to take place, it looks as if a record will be set for the number of players competing in the APPT Snowfest. Already 58 players are lined up to take their seats on Friday´s Day 2 and there could be some long, dark (and cold) nights ahead for those who wish to become the 2012 APPT Snowfest Champion!

Chip Counts from Day 1B of the APPT Snowfest