Patrick Kelly is the chip leader at the end of the PokerStars Caribbean Adventure Day 3 after a rush of eliminations left just 59 players in the tournament. 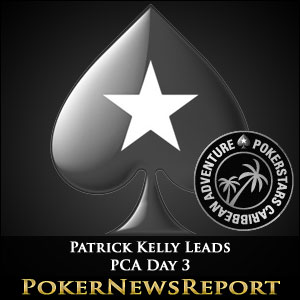 Patrick Kelly is the chip leader at the end of the PokerStars Caribbean Adventure Day 3 after a rush of eliminations left just 59 players in the tournament.

Day 3 of the PokerStars Caribbean Adventure saw 166 players returning to the tables in the hope of being one of the 144 who would cash in the event. Day 2 overnight leader, 19-year-old Nicolas Godoy, was hopeful of turning a $10.00 satellite into a $1.85 million payday and, although not enjoying the progressive day he had experienced on Day 2, is still among the top ten players on the leaderboard.

While little was happening for Godoy, Joe Serock initially took the chip lead – crushing Jeremy Kottler with K♥ K♣ and then busting Mor Ben David just before the bubble in an A♣ A♦ > K♦ K♠ race. Serock also benefitted from the willingness of other players to get their chips into the middle once they were assured of a cash, and collected dividends from Antonio Matias (A♠ A♣ > A♦ 10♥) before using his massive chip stack to force Anthony Borde out of a quarter million chip pot.

The Rise and Rise of Patrick Kelly

Kelly got over the million chip mark when getting all his chips into the middle with A♣ A♠ and getting a call from Michael Malm (K♠ K♦), and finished the night with 1,750,000 chips after coming out on top again against Max Silver – this time flopping a spade flush against Silver´s paired King (K♣ J♦). Max Silver will be sick of the sight of Patrick Kelly, but at least picked up $21,000 for finishing in 82nd place.

Looking Ahead to Day 4 of the PCA Main Event