Pawel Keller and Thomas Finneran are virtually tied at the top of the UKIPT Cork Main Event leaderboard and, between them, have over half the chips in play. 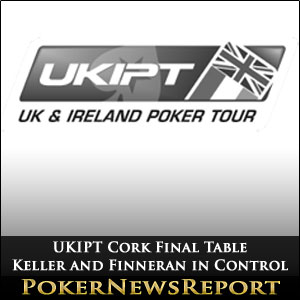 Pawel Keller and Thomas Finneran are virtually tied at the top of the UKIPT Cork Main Event leaderboard and, between them, have over half the chips in play.

When the final table of the UKIPT Cork Main Event starts at Rochestown Park Hotel at noon today, all eyes will be on the intriguing battle between PokerStars qualifier Pawel Keller from Poland and Ireland´s best chance of a home victory – Thomas Finneran.

Throughout Day 3 of the event, the two players traded places at the top of the chip counts – Keller only grabbing top spot in the last hand of the day when eliminating short-stacked Dylan Roberts in a Kings > Sevens hand – but today will see the Irishman have position on his rival.

The Ladies get the Attention on Day 3

Thirty-three players started the penultimate day of the UKIPT Cork Main Event, with Finneran leading the way from Keller. One of the early casualties was PokerStars Pro Dale Philip, who was rivered out of the last of his chips by PokerStars team mate Liv Boeree (Q♣ 7♣ > A♦ 9♥).

Despite Boeree flopping a full house to chip up against Andrew Grimason (J♠ 7♦ > A♥ K♣), her attempt to become the first female winner of a UKIPT Main Event hit the rocks when she ran her K♦ 7♠ into the 10♥ 10♦ of Fridjon Thordarson and was bust in nineteenth place.

However, the popular Deborah Worley-Roberts still remains in contention for the honour of first female winner. Worley-Roberts had started the day ninth in chips and was involved in much of the action throughout the day.

Keller gets a Million – and Finneran´s Right Behind Him

Prior to Worley-Roberts´ double-up, Pawel Keller had been the first player to get through the million chip barrier. Having moved into the chip lead early in the day with the elimination of Kieran Furey (K♥ K♦ > Q♦ Q♣), Keller eliminated Jason Lee in thirteenth (K♣ J♦ > J♥ J♠) and Derrick Wall in tenth (A♣ Q♦ > 7♥ 7♣) before busting Dylan Roberts to set the final table.

However, the more Keller´s chip stack grew, the harder he was pursued by Day 2 chip leader Thomas Finneran. In the hand after Jason Lee´s elimination (above), Finneran flopped two pairs with A♠ K♦ to send Karl Thompson (10♦ 10♠) to the rail and then knocked out Cahal Heapes in the most fortuitous circumstances (7♠ 7♣ > J♦ J♣) when the board ran K♠ 5♥ 4♠ / 3♥ / 6♥ to give Finneran a straight.

Looking ahead to the Final Table

When play resumes in the UKIPT Cork Main Event, 44 minutes remain in Level 22 and the blinds will be 8,000/16,000 with an ante of 2,000. Nicholas Newport is the player most at risk when the cards go in the air as the players compete for the first prize of €60,440. You can see how he and all the other players in the UKIPT Cork Main Event get on by following PokerNewsReport.