Kees Aerts leads the final table of the Venlo Poker Series after bouncing back strongly from a horrendous bad beat to dominate the later levels of Day 1. 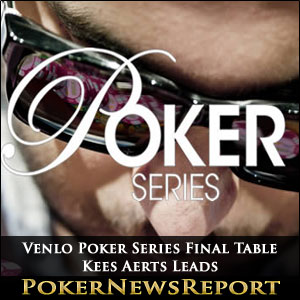 Kees Aerts leads the final table of the Venlo Poker Series after bouncing back strongly from a horrendous bad beat to dominate the later levels of Day 1.

The two-day Venlo Poker Series Main Event got underway yesterday at the Holland Casino in the picturesque town of Venlo on the Dutch/German border. As the cards went in the air for the start of the Main Event the rain stopped and the sun came out, but it did not prevent 108 players ponying up the €400.00 buy-in to compete in the event.

Among those who travelled to Venlo to compete in the tournament were last year´s EPT Berlin Cup winner Pieter de Korver (who also won the Venlo Series of Poker Main Event earlier this year) and Marcel Vonck, who narrowly missed out on a bracelet in the Pot Limit Omaha Event of the 2014 WSOP. There was also a “Helmuth” in attendance – Helmuth Janssen, who unfortunately bust out during the early levels of the tournament.

Aerts Bounces Back from Bad Beat

Each of the 108 players started the day with 8,000 chips, but a quick glimpse around the Holland Casino at the end of the second level showed a clear chip leader – Kees Aerts – who had bust out two players already to bring his chip stack up to 30,000 chips.

Aerts was leap-frogged at the top of the leaderboard by Alex Brand after he had got three streets of value with a flopped Ten-high straight, and then Aerts fine start was ruined by a bad beat in which he was all-in with Ace-King on an Ace-high flop against an opponent with Ace-Queen. A Queen was dealt on the Turn and Aerts´ chip stack was reduced to little more than he started with.

Almost immediately Kees Aerts was on a recovery mission – and he doubled up with K♣ K♠ against an opponent´s K♦ J♠, and then forced another opponent off of a 17,000 chip pot following the flop of K♣ 3♠ 9♥ implying as he mucked his cards that he had found pocket Kings once again.

The hand which saw Kees Aerts regain the chip advantage came with just fourteen players remaining – and just thirteen due to be paid. Xiao Cai Biao moved all-in for his last 6.000 chips with A♣ J♥, and Ellert Axle attempted to isolate him by raising to 17,000 chips with J♠ J♣. Aerts shoved over the top with A♥ A♠ and Axle made the call.

The board ran 7♥ Q♦ 6♣ / K♦ / 3♦ to make Xiao Cai Biao the bubble boy and eliminate Ellert Axle in thirteenth place – Kees Aerts moving into a substantial chip lead with 185,500 chips. Aerts then enhanced his chip stack by busting out Martin Raskop in twelfth place A♥ 8♥ > Q♥ 5♥ after both players had rivered a Heart flush.

The final table was set when Alex Brand flopped a set of Sevens to send Niels de Moree to the rail in eleventh place, and with blinds now at 1,200/2,400 (ante 300) the final table does appear to be a battle between Aerts and Brand to see who will collect the €11,820 first prize – with possibly a contribution to be made by third-placed John Turner.