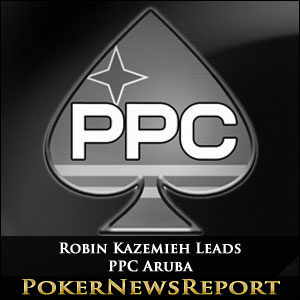 Several players had re-entered the event (including Serock – 4 times!), bringing the prize pool up to $200,000, and meaning that all the nine players who survived Day 2 will be assured of a $5,000 min cash for reaching the final table, with $68,000 up top for the winner.

After five and a half levels of play, the leaderboard at the close of play was headed by Robin Kazemieh; who went on a hot streak after the dinner break to bust out Vincenti Cham Q♣ J♦ > Q♠ 5♠ on a Queen-high board, and a player identified only as “Pieter S” when Kazemieh flopped a pair of Kings to best “S´s” Q♦ Q♣.

Kazemieh (559,000 chips) has been on a bit of a roll lately – winning a side event at the FTP Montreal Poker Festival and finishing second in the first (side) event of the Players Poker Championship in Aruba – and he continued that roll to take 75,000 chips from Stephen Sindler (A♦ A♥ > K♦ 10♦) before play concluded for the night to take a substantial chip lead into the climax of the event.

Closely Packed in Behind

Defending champion Joe Serock had a storming day considering that he was the shortest stacked player when Day 2 started. A nice double-up just before the first break gave him some chips to play with, and he used these to good effect after the dinner break – including winning a big pot against Stephen Sindler 6♦ 6♣ > A♣ 9♣ – to take 222,500 chips to the final table.

Looking Ahead to the PPC Aruba Final Table

When the PPC Main Event resumes at the Radisson Aruba Resort, the nine remaining players will have around 30 minutes left to play in Level 18 (blinds 2,500/5,000 – ante 500). Robin Kazemieh is the man to catch but, with Ebanks and Serock still alive in the event, there could be a very exciting conclusion to this event.