Kara Scott only recently arrived in Las Vegas for the World Series of Poker – but has struggled in her first two events at the Rio All-Suite Hotel & Casino. 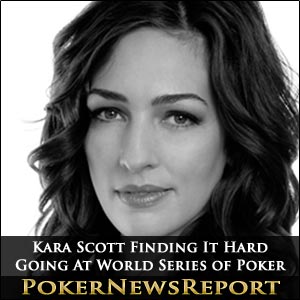 Canadian Kara Scott only recently arrived in Las Vegas for the World Series of Poker – but has struggled in her first two events at the Rio All-Suite Hotel & Casino.

Still, the 34-year-old beauty – who spent 10 years working in London before relocating to California in 2009 – was happy to be back in the USA “after a month spent rambling around Europe” when she had to lug a pile of enormous and heavy bags through security time and again.

However, before even making it to Vegas, Scott wrote on her PartyPoker blog that she was desperately trying to sort out my suitcases and get ready for the World Series of Poker.

But Scott – who will again return to her role as ESPN’s sideline reporter once her competitive days are over at the series – always enjoys her time in Vegas as she can pack far fewer clothes “when I’m just playing poker”.

The Alberta native is also thrilled that she is allowed to indulge in both sides of my poker split-personality by first playing in some events over the next few weeks as she goes “bracelet hunting” before returning to her day job with ESPN in July.

Thankfully, with the way her luck has been going, Scott says that she loves “this gig and is stoked to get back behind a microphone” – particularly as she works “with a really incredible production company and some fantastic producers at ESPN.

Scott – who always makes sure she has a lot of fun while working, even though there are “a lot of long hours and hard work” involved – believes there is something really satisfying about working hard and stretching into a role.

Well, no matter how it pans out for Kara, we at PokerNewsReport.com hope she can add to her five cashes at the card tables of the Rio.