Mustapha Kanit made history yesterday at the Crown Poker Room in Melbourne when he became the first player to win two Aussie Millions events in the same Series. 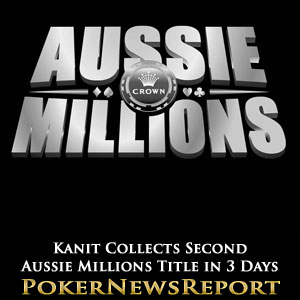 Event #4 of the 2014 Aussie Millions series was an AU$1,100 buy-in 6-Max NL Hold´em tournament which attracted a field of 494 players, including the father and son team of Tony and Anthony Hachem, Paul Newey, 888Poker´s Shane Warne and winner of Aussie Millions Event #2 Lorenzo Sabato.

The above five players all cashed in the tournament but, as the final six players took their seats, all eyes were on Event #1 winner Mustapha Kanit to see if he could become the first player to claim a dual success in the same series of the Aussie Millions.

However, whereas on Sunday Mustapha Kanit had gone into the final table with a commanding chip advantage, on this occasion he was behind Daniel Neilson – a former ANZPT Sydney High Rollers Champion – with last year´s $2,500 6-Max Aussie Millions champion Grayson Ramage also in the mix.

When the final table got underway, just two minutes remained in Level 19 (blinds 6,000/12,000 – ante 1,000), but it was long enough for Tam Truong and Mustapha Kanit to switch places on the leaderboard when Truong´s flopped set of Sixes improved to a Full House and he took three streets of value from the Italian.

Tanya Phu and Grayson Ramage also flip-flopped places temporarily on the leaderboard when Phu doubled-up A♠ 10♦ > A♦ 7♦; but Phu was the first player to depart the final table of the 2014 Aussie Millions Event #4 when she moved all-in with 3♥ 3♠ on the flop of 5♥ 9♣ Q♥ and received a call from Tam Truong (Q♠ 8♣) whose paired Queen held.

With Tanya Phu´s departure, Grayson Ramage was now the short-stacked player; however his position improved when he caught flush draw to double up against Daniel Neilson A♣ 4♣ > 7♦ 7♠ and then eliminated Paul Altis in fifth place when his A♥ K♥ paired on the Turn to best Altis´ 9♥ 9♣.

Mustapha Kanit also moved up a gear – taking a big pot from Ramage pre-flop with a five-bet shove, and then calling a King-high bluff by Tam Truong with pocket Eights to scoop another substantial pot. A check-raise on the River forced Truong out of another valuable pot and, as Level 22 began (blinds 12,000/24,000 – ante 3,000), Mustapha Kanit had moved into the chip lead.

Gamage Goes – Neilson Next Out the Door

Grayson Gamage´s attempt to win his second Aussie Millions ring had met with mixed fortunes as he tried to make an impression on the three chip leaders, and he was definitely unlucky to depart the tournament in fourth after calling Tam Truong´s post-Turn shove with Q♠ 9♥ on a board of Q♦ 4♦ 5♥ / 10♦ and discovering that Truong had pocket Kings.

Truong then built up a substantial chip lead when forcing Mustapha Kanit out of a big pot, but Kanit is nothing if not resilient (and a little lucky) and after doubling up against Daniel Nielson 4♥ 3♥ > K♥ 10♥ (Kanit turned trip Fours) he bust the former chip leader in second place 9♠ 9♣ > A♥ 8♠.

Going into the heads-up climax of the Aussie Millions 6-Max, Tam Truong held a 2.76 million -v- 2.18 million chip advantage over Mustapha Kanit, but Kanit quickly established a 2:1 chip advantage when his 9♦ 3♦ turned Trip Nines, and then Kanit reduced Truong to less than a million chips when he shoved his stack in on a board of 2♣ 9♦ J♦ / K♥ / 5♦ and Truong lad to let his hand go.

The last of the Truong´s chips went in shortly after on the board of 9♠ J♣ 8♣ / K♠. Kanit had checked to Truong, who bet 120,000 chips. Kanit responded by raising to 290,000 chips and Tam Truong announced he was all-in. Kanit did not hesitate to make the call and the cards were on their backs:

Truong was drawing dead, so the River card (8♥) was meaningless and Mustapha Kanit had claimed his second Aussie Millions title in three days.

As Mustapha Kanit was “otherwise engaged” when Aussie Millions Event #5 started, only fifteen events remain for the hot-running Italian to collect his third title at the 2014 Aussie Millions. The AU$1,100 buy-in Pot Limit Omaha Event #5 was halted for the night with ten players remaining. You can find out who eventually won the tournament by following @PokerNewsReport on Twitter.