A very late finish on Day 4 of the WPT Borgata Championship saw Kane Kalas – the most active player on the day – emerge as the 6-handed final table chip leader. 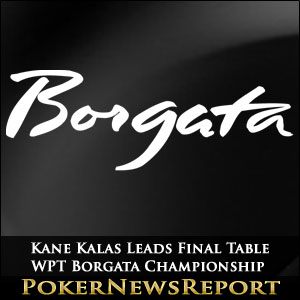 A very late finish on Day 4 of the WPT Borgata Championship saw Kane Kalas – the most active player on the day – emerge as the 6-handed final table chip leader.

It was a long, long Day 4 of the WPT Borgata Championship yesterday, as the thirty-one players that started the day were reduced to a final table of six over more than eight 90-minute levels of action. At the close of play, Kane Kalas emerged as the chip leader after a very swingy period of play when the game went seven-handed.

Kalas´ chip advantage will be equivalent to 37 big blinds when play resumes at the Borgata Casino later today; but, despite his big lead, victory is in no way certain based on the evidence of what happened in the latter stages of yesterday´s action – and the nature of the other players at the final table.

The scene was set for an extended day of action during the early levels of play, when more players doubled up than bust out of the WPT Borgata Championship. Richard Munro and Iaron Lightbourne both doubled up early, after which Ed Blount tripled up when Turning a six-high straight.

Although the game lost Jake Vo and Matt Glantz in quick succession, it was not until deep into the second level of the day (Level 25 – blinds 15,000/30,000 – ante 4,000) that there was any significant reduction in the number of players.

Iaron Lightbourne (A♥ J♣) flopped two pairs to bust Hakan Demircioglu  (Q♥ Q♠) and Kane Kalas (J♠ 7♦) eliminated Ray Shackelford (A♦ 10♣) with a flopped pair of Sevens before Kalas then rivered a superior spade flush to send Joseph Galazzo to the rail K♥ K♠ > A♣ 10♠.

Gaspard Knocked off the Top as Elias Cracks Aces Twice

Going into Day 4 of the WPT Borgata Championship, Jean Gaspard had a massive chip lead equivalent to more than 100 big blinds; but he was knocked from top spot during the sequence of double-ups by Darren Elias, who flopped a set of Kings to crack Gaspard´s pocket Aces.

Ed Blount also suffered a bad beat to be eliminated from the tournament – getting the last of his chips in with A♣ K♥ against Nicholas Gerrity´s A♠ Q♥, only for the Q♣ to appear in the window – but Ace-Queen was no good for Daniel Weinman, who fell in twentieth place against Kane Kalas´ flopped set of Jacks.

As the last eighteen players assembled around two tables, Darren Elias again cracked pocket Aces, and this time the unlucky victim was Justin Zaki. Zaki had been sitting quite handy on the leaderboard throughout the last couple of days, but he lost his last million chips with A♣ A♠ against Elias´ A♦ K♠ when Elias rivered a Broadway straight.

Two Levels for Two Tables to Become One … …

The rundown from 18 players to an unofficial final table of ten players was also a prolonged affair. Two-table play started in Level 26 (blinds 20,000/40,000 – ante 5,000), and although Barry Schulman and Erik Cajelais both suffered quick eliminations, other players were doubling up for fun.

… … and then Six More Hours to Reach Final Six!

It then took an incredible four levels of play to determine who would be the final six players in the WPT Borgata Championship. Zo Karim left relatively quickly in tenth place when Kane Kalas Turned a Broadway straight to bust Karim A♥ K♦ > 7♥ 7♠, and one level later Darren Elias rivered trip Sevens to eliminate Ory Hen in ninth place 10♦ 7♦ > A♥ J♥.

Nicholas Gerrity departed the unofficial table in eighth place when his pair of Kings was out-kicked by Aaron Overton K♣ J♥ > K♦ 3♦, but thereafter it took almost 100 more hands of play to determine who would be eliminated in seventh place and miss out on appearing on the live streamed WPT Borgata Championship Final Table.

Ultimately it was the most enigmatic of characters – Jean Gaspard – who was to be the final table bubble boy after moving all-in for his last 1.25 million chips. Both Darren Elias and Kane Kalas made the call and checked down the board of 10♥ 7♥ 6♦ / J♦ / 4♠. Gaspard turned over A♠ 10♦ for top pair, but Kalas had Q♠ Q♥ for an overpair, and the final table of the WPT Borgata Championship was set.

Looking Ahead to the WPT Borgata Championship Final Table

During the last couple of levels of play, the chip lead in the tournament changed hands several times. Kane Kalas, Blake Bohn and Darren Elias all took turns appearing at the top of the leaderboard; and – despite their relatively small stacks – Aaron Overton, Jose Serratos and Ray Qartomy could all make their presence felt when play resumes at 4:00pm (ET) later today with blinds of 80,000/160,000 and a 20,000 chip ante.