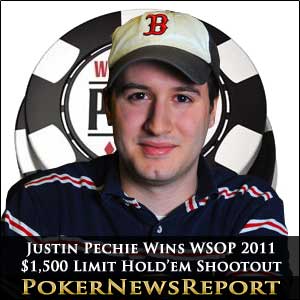 American Justin Pechie emerged victorious from a 538-player field to secure a gold bracelet and $167,060 at the $1,500 Limit Hold’em Shootout event at the World Series of Poker (WSOP) 2011 in Las Vegas last night.

The Connecticut native dominated in the Rio All-Suite Hotel & Casino once the field had been cut down to just three players to eventually beat fellow American Dale Eberle in heads-up play.

While South Carolina’s Eberle battled back from just 50,000 to go head-to-head with Pechie, it was the latter who took total control to crush his opponent in the third-last hand and gain an 8 to 1 chip lead.

Eberle raised on the button, only for Pechie – in the big blind – to re-raise. Eberle called and the flop showed 8c-9h-5s. Pechie bet to get a call from Eberle.

The 2h came on the turn and once again Pechie bet out for Eberle to call. The Kc arrived on the river and Pechie bet. But Eberle raised this time, while Pechie re-raised, and Eberle called to show K-7 for a top pair on the river. However, that was not good enough as Pechie’s 9c-9s had made a set.

Following that hand, Pechie flopped trip queens while getting value on all three streets to leave Eberle with less than two big blinds – and the remainder of his chips went in on the final hand pre-flop.

Pechie appeared overwhelmed to be handed his first gold bracelet – and who can blame him – while Eberle left with $103,454 for his runner-up spot.

Top 10 placings and payouts from the $1,500 Limit Hold’em Shootout event: