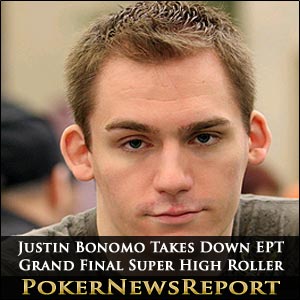 American Justin Bonomo ended a three-year drought with victory in the PokerStars European Poker Tour (EPT) Grand Final Super High Roller Eight-Max Reload event for €1.64 million after starting the last day of the €100,000 buy-in tournament as chip leader – a position he did not relinquish on his way to the title at the Monte Carlo Bay Hotel & Resort.

The Las Vegas pro – whose last win came back in April of 2009 when he picked up $227,692 for taking down the World Series of Poker Circuit (WSOPC) Caesars Palace $5,000 buy-in No-Limit Hold’em Championship event – was actually one of seven to players who re-entered, so making his total buy-in €200,000.

However, having now secured the biggest score of his career – easily overtaking the $413,165 he earned for fifth place in the 2009 WSOP $40,000 buy-in No-Limit Hold’em 40th Anniversary event – Bonomo will most certainly consider that extra €100,000 to have been well worth it as he moved past the $5 million mark in live tournament earnings.

In fact, six other players also reloaded after exiting, but only Bonomo – who had accumulated $2,902,658 before taking down this event – managed to cash as he ultimately beat Tobias Reinkemeier in their heads-up meeting that left the German runner-up with €1,064,000 as his share from a staggering prize pool of €4,432,500.

As noted above, Bonomo began the final day with a huge lead, having collected more than 40% of chips at the table, and continued with his rampaging to total five eliminations as he charged towards glory.

The obviously delighted champion took time out from his celebrations to chat with the PokerStars Blog team, saying: It’s so much more money than I’ve ever won in a poker tournament before.

Bonomo certainly doesn’t believe that his success came easily, however, pointing to Reinkemeier as the perfect example of a tough opponent when adding: The final table, in terms of skill… Tobias was my best opponent. He’s a very good player.

Bonomo Won’t Rest on His Laurels

However, the American will have to cut his partying short as he has no intentions of basking in this glorious victory now that the €10,600 buy-in main event is underway in Monaco.

Bonomo, who will start today’s Day 1b of that tournament, said: To be honest, what’s on my mind right now is the main event.

However, once Grospellier had been eliminated in third by Bonomo, it all came down to an American versus a German for the title, with the former holding a huge 9,580,000 to 1,675,000 chip advantage as play began.

The final hand saw Reinkemeier, on the button, raise to 125,000. But big blind Bonomo then three-bet to make it 350,000, prompting the German to move all-in for approximately 1.5 million.

Bonomo called to show A♦ Q♣, while Reinkemeier revealed 4♠ 4♣ for a coin-flip showdown for the championship. The A♥ K♣ 5♦ flop gave Bonomo top pair for the lead, while 10♠ on the turn left Reinkemeier requiring a four to double-up and remain in contention for the top prize.

However, the 7♦ came on the river, ensuring that Bonomo secured his second major title of his career, while runner-up Reinkemeier added another huge score from the EPT Grand Final following his 2010 success, for $1,272,698, in the €25,000 buy-in No-Limit Hold’em High Roller.

The Hamburg player also moved into second spot – behind Team PokerStars Pro Pius Heinz – on Germany’s all-time money list, although he is still some way behind last year’s WSOP main event champion, who has $8,876,067 in total winnings, with $8,715,368 of that due to his success in Vegas last November.

The first player to hit the rail on the final day was short-stacked Ukrainian Team PokerStars Pro Eugene Katchalov, who exited in eighth place to ensure that the money bubble had now been reached.

The unfortunate bubble boy was 2010 WSOP main event champ Jonathan Duhamel, meaning the Canadian just missed out on €310,000 when being eliminated by Grospellier in seventh spot.

Big blind Negreanu got out of the way and Grospellier swiftly called to show A♦ A♣, while a disappointed Duhamel revealed K♠ Q♠ to be well behind. Duhamel was left drawing dead following the turn to leave the casino empty-handed.

Another Canadian, Negreanu, followed in sixth place soon after when he found himself all-in pre-flop while holding A♣ K♣ – to be met the pocket tens of Bonomo. The American had the elimination in the bag moments later when a ten arrived on the flop for a set.

Kagawa was next to hit he rail in fifth place when a three-handed pot also involving Bonomo and Reinkemeier developed when the blinds were set at 20,000/40,000 with a 5,000 ante.

Reinkemeier gave this some thought, before five-bet shoving for 1,580,000. Bonomo first asked for a count, then also thought for some time before also shoving to create a massive three-way pot.

Reinkemeier showed J♦ J♠, Bonomo revealed J♣ J♥ and Kagawa showed K♣ Q♦. While behind, the Japanese player still had two overcards while it was going to be difficult for either of his opponents to improve.

However, the 9♥ 9♣ 7♦ 9♠ A♣ board was no good to Kagawa, who left the table as Reinkemeier and Bonomo – with identical full houses – shared the pot.

Antonius was next to leave in fourth place during the same level – and about eight minutes later – when he came up against the dominant Bonomo.

The Finn, on the button, raised to 80,000 with big blind Bonomo calling to see the Q♦ Q♣ 8♣ flop. The American checked, as did Antonius for the K♥ to fall on the turn. Bonomo took action on this card by betting 140,000, while Antonius called for both to see the 9♥ river.

Bonomo then fired in 380,000, resulting in Antonius tanking for a short while before slowly counting his chip stack, which amounted to somewhere about the 700,000 mark. Again, the Finn stalled before finally moving all-in, to be called by Bonomo.

Antonius showed Big Slick for two pair, kings and queens with an ace kicker, while Bonomo revealed J-10 to hold a king-high straight for the knockout and a huge chip lead.

Third place went to Team PokerStars Pro Grospellier shortly after play had reached level 18, with the blinds at 25,000/50,000 and a 5,000 ante. Action had folded to small blind Bonomo when he made a 115,000 raise, with big blind Grospellier calling to see a flop that included two spades

This saw Bonomo make a 140,000 bet, which the London-based Frenchman called to see a queen on the turn. The American again bet, this time 375,000, only for Grospellier to shove all-in.

Bonomo called to show K Q♣, while Grospellier revealed K♠ 10♠ for the latter to hold top pair as the French pro saw his combo draw fail dramatically with a blank river card.