Bonomo is on fire right now in Monte Carlo, having emerged as chip leader after Day 2 of the PokerStars EPT Grand Final €25,000 buy-in High Roller tournament. 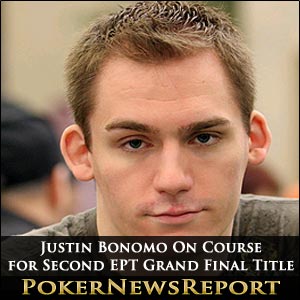 The Las Vegas pro – who has already pocketed $2,167,588 for winning the Super High Roller and also picked up $46,209 for finishing in 28th place in the main event at the Monte Carlo Bay Hotel & Resort – holds 2,202,000 chips to top the leaderboard after sending eight-time World Series of Poker (WSOP) bracelet winner Phil Ivey to the rail in ninth place early this morning as the unfortunate final table bubble boy.

However, Russian Andrey Pateychuk might be the most disappointed as he just missed out on cashing with his elimination in 15th place.

The Muscovite was the short stack and all-in against Bonomo while holding A♥ A♣ on a flop that read J♠ 10♥ 6♠. The American had tabled A♠ 2♠ and completed his flush draw when the 3♠ came on the turn to have the winning hand – and the knockout – even before the 7♥ arrived on the river.

Incredibly, there will be two Americans, two Canadians, two Russians and two Germans in contention when play begins. But which country will emerge as the winner? Well, who knows, as it’s all to play for with the unpredictability of such an event surely making for a thrilling last day.

However, Ivey will – like Pateychuk – be more than a little frustrated at his exit when moving all-in with the better hand against Bonomo when his top set was out-rivered by his fellow American’s flush.

Ivey made another continuation-bet of 200,000, only for Bonomo to raise all-in. Ivey swiftly made the call to turn over K♦ K♣ for trips, while Bonomo showed K♠ Q♠ for top pair, as well as a flush draw.

The J♠ river completed the board to give Bonomo the flush and send Ivey to the rail in ninth place.

Bonomo was already the chip leader, but shot way ahead of Germany’s Igor Kurganov (1,288,000) with that river spade to hold almost one million more than his nearest rival.

Bonomo Looking to Stay In Front

In what has been an incredible Grand Final for the American, he has already taken his live tournament earnings beyond the $5 million mark and is now in a great position to add another €1,080,000 – or about $1,425,874 – if he can stay ahead at today’s final table.

Much like his Super High Roller victory, Bonomo enters the eight-handed final table as a massive chip leader, so his seven rivals will undoubtedly be chasing him down once play begins.

Bonomo also scored an incredible double elimination during level 12, with the blinds at 1,200/2,440 with a 300 ante, when sending Ukrainian Oleksii Kovalchuk and Englishman Peter Akery to the rail.

Bonomo was way behind pre-flop when all-in with his J♦ J♠ as Kiev’s Kovalchuk showed Q♥ Q♦ and Bristol’s Akery revealed K♠ K♥. Akery was the shortest stack to leave Kovalchuk and Bonomo battling it out for a side pot.

The 10♦ 8♦ 7♠ flop handed Bonomo a gutshot straight draw, while Akery stayed in front and Kovalchuk remained ahead in the side pot. However, the J♣ turn shot Bonomo into the lead with his set, while the 10♣ river paired the board to give Bonomo a full house and send his two opponents to the rail.

Chris Moorman Not in Seventh Heaven

Moorman exited not long before Bonomo’s amazing success. The Brighton pro was in middle position when he re-raised to 5,200, but was himself re-raised to 12,200 by button Roman Romanovsky.

Play then folded around to Moorman, who went into the tank for quite some time before eventually raising all-in for about 90,000. Ukrainian Romanovsky snap-called to show 7♥ 7♣ while Moorman revealed J♠ 10♦. The 9♦ 9♣ 3♦ 5♠ Q♥ board changed little to send the Englishman to the rail.

Even earlier, Swedish online sensation Blom – who did manage one double-up through Mizzi early on – exited during level 11 when losing out to Gruissem. Gruissem raised from the hijack seat, only for Blom to three-bet to 10,500 from the button.

But the German then four-bet to make it 22,800 to go, with Blom answering with a five-bet all-in move of his own for about 105,000. Gruissem swiftly made the call to show A♥ Q♠, while Blom tabled A♣ J♥ to be dominated.

The A♠ K♠ 7♣ flop gave both top pair, but the 9♠ river then handed Gruissem a spade flush draw. However, he didn’t need the final spade as the 3♣ meant Blom was out.

Mizzi also hit the rail early on Day 2 as the first elimination when he was all-in pre-flop with ace-queen against pocket jacks of Vincent van der Fluit, who stayed in front to score the knockout.

Cates was soon joining Mizzi at the rail when he was sent packing by American David Peters. Cates, with K♦ 10♠, was all in pre-flop and in a bad way against Peters’ A♣ K♠. The 9♠ 8♥ 4♦ A♠ K♣ board gave Peters top two pair while Cates could only manage second pair to exit the tournament.

Boeree Loses Out to Ivey

Ivey thought for a few moments before re-raising all-in, with Boeree following with her last 225,000 chips. The English pro, with 8♦ 8♣, would have been disappointed to see Ivey table the nut straight with his J♥ 9♣ as that beat out her trip eights, although she did have outs for a full house. However, the J♠ river ensured that Ivey’s straight held to send the beauty to the rail.

Vincent van der Fluit – who had started Day 2 second in chips – also crashed out during level 13, not long after he had seen his chip stack demolished to just 43,000 by Gruissem.

Van der Fluit tanked for while before calling and then mucking his cards as Gruissem showed A♠ A♣ for two pair, aces and fours, as well as a huge leap up to the top of chip leaderboard with his double-up. San Jose’s Jaka soon joined Van der Fluit on the rail.