Bonomo holds the chip lead after WPT World Championship Super High Roller Day 1 as one of only three players to break through the one million-chip barrier. 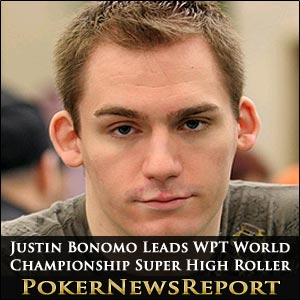 American Justin Bonomo holds the chip lead after Day 1 of the World Poker Tour (WPT) World Championship $100,000 buy-in Super High Roller at The Bellagio in Las Vegas as one of only three players to break through the one million-chip barrier.

Ten levels were played out as six players hit the rail to leave the event with 19 returning today as they all chase the top prize, including some less-well known names such as California duo Bill Klein (seventh on 740,000) and Roger Sippl (12th on 556,000), and Daniel Perper (11th on 680,000), of Illinois – all of who survived – as well as Day 1 casualties Michael Parziale, Rob Zeps and Brazilian Clemenceau Calixto.

Daniel Negreanu Fails To Make Most of Two Re-Entries

However, there were also some big-name exits, with San Francisco’s Galen Hall, Toronto native Daniel Negreanu – who re-entered twice for a $300,000 total outlay – and former WPT champ Bertrand ‘ElkY’ Grospellier being eliminated early.

London-based Frenchman Grospellier was knocked out by Nottingham’s Trickett during level 8 – when the blinds were set at 2,500/5,000 with a 500 ante. The hand saw Mercier, under the gun, open with a raise to 12,000 before button Grospellier re-raised all-in for 120,500.

Big blind Trickett called and Mercier folded, with the English pro showing 10♦ 10♠ to hold the pre-flop lead over 31-year-old Grospellier’s A♦ J♥, although the Team PokerStars Pro did have two overcards. However, the Triple Crown winner hit the rail as the first elimination after the board ran out Q♥ 8♣ 2♣ 7♦ 7♠.

Toronto-based Bonomo, meanwhile, struggled for much of Day 1, before enjoying a late double-up against eight-time World Series of Poker (WSOP) champion Seidel to take the chip lead into today.

However, we could well see Team PokerStars Pros Negreanu and Grospellier, as well as Japan’s Masa Kagawa, Parziale, Zeps, Calixto and Hall, back today as the opening-day field unanimously agreed to allow players to register 15 minutes into Day 2. Of course, this would also allow for new entries, so we could see a few names on the Day 2 list.