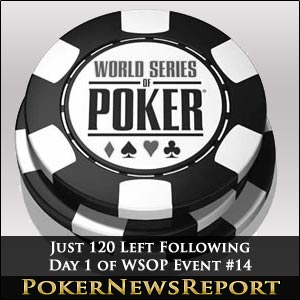 This is always a popular event as it takes just three table successes to take home a bracelet – as well as $311,174 for the winner this time. Of course, that is much easier said that done as the likes of Daniel Negreanu, Jose ‘Nacho’ Barbero, Bertrand ‘ElkY’ Grospellier, Steve O’Dwyer, Jake Cody, Chris Moorman, Jonathan Duhamel, Joseph Cheong, Viktor ‘Isildur1’ Blom and Liv Boeree discovered as they crashed out without cashing.

Englishman Eames might be the most fortunate, though, after he had to battle past a table full of ‘grinders’. The Southport pro eventually had to beat Florida’s Tony Cousineau in what turned out to be an epic heads-up battle, which was only decided when Eames pushed all-in with Q♣ 10♠. Cousineau called to be ahead with his A♠ 7♦, but the board came 6♠ K♦ 9♥ 4♣ J♦ to hand Eames a straight for the knockout.

Eames, as with all Day 1 survivors, is now guaranteed at least $5,295 for making the final 120 players, but he will surely be aiming to bag the top prize and bracelet.

The Amazon Room at the Rio will again play host to this event, with the remaining players spread over 12 tables. Each table will play down to a winner, with the surviving dozen return tomorrow. They will then play at two tables until there is only 10 players left, when they will gather to play down to a winner.

As this is a shootout event, chip counts mean very little right now, so Poker News Report won’t publish a leaderboard until players make the cash.