Jussi Nevanlinna takes a huge chip lead into the final day of the Masters Classic of Poker Main Event at the Holland Casino in Amsterdam after completely bossing the tournament as the final table approached. 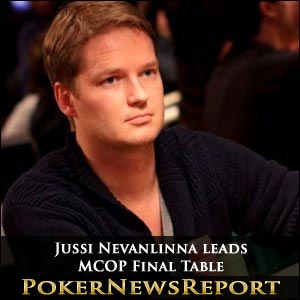 Jussi Nevanlinna takes a huge chip lead into the final day of the Masters Classic of Poker Main Event at the Holland Casino in Amsterdam after completely bossing the tournament as the final table approached.

With over a third of the chips in play, and more than twice the stack of his nearest challenger Athanasios Polychronopoulos, the Finnish poker player completed the day with a chip stack ten times larger than he started with.

Nevanlinna Gets Involved From the Start

As the 40 remaining players took their seats on Day 3 of the Masters Classic of Poker Main Event, four were going to leave empty handed. Whereas this would normally be the catalyst for a long, slow period of cautious play, the bubble burst quickly. Yvens Poortinga went first hand when his attempted double up with A♦ J♥ was bested by Kevin Tribes A♥ Q♥. Casey Kastle and Ben Roberts were also quick departures before Nevanlinna caught trip Eights to eliminate Bass Faessen in thirty-seventh position.

Into the Bubble and Beyond

Once the remaining players were certain of cashing, the action became even more furious. Hugo Borst had his pocket Sixes dominated by David Peter´s pocket Sevens to end his freeroll experience, Barny Boatman achieved his fourth successive cash in a major live poker tournament before getting all in with first and third pair – only to discover that Athanasios Polychronopoulos had first and second pair – and Janno Cazemier (J♠ 8♣), who is still live on the final table of the High-Rollers Event, was unable to improve enough to master the Queens of Makarios Avramidis.

As the tables were re-drawn to account for the eliminations, three Americans – Joe Ebanks, David Peters and Brandon Cantu – found themselves seated alongside each other. Ebanks had the best of the encounter as he first relieved Peters of 35,000 chips with Q♠ Q♦, doubled up against Brandon Cantu when his 8♣ 8♥ held against Cantu´s K♠ J♠, and then sent the overnight chip leader to the rail when Ebanks´ A♥ J♣ caught trip Aces to best Cantu´s 6♣ 6♦. Both Ebanks and Peters survived the day, and will be joined at the final table by compatriots Kevin Tribes and Athanasios Polychronopoulos (he lives in New York) – Peters being the only one of the four not to own a WSOP bracelet!

Nevanlinna into the Ascendancy

As the final 18 players broke for dinner, Jussa Nevanlinna was in a modest third place on the leaderboard, but whatever he had to eat certainly agreed with him. On his return he busted Laurence Houghton after calling the Englishman´s audacious Jack high bluff, crippled Mark van der Loo with Kings against the Dutchman´s Jacks and eliminated compatriot Marcus Ristola when his pocket Queens held against Ristola´s A♣ K♣. Just for good measure, Nevanlinna sent a recovering Mark van der Loo to the rail in tenth when coming from behind with K♦ 2♦ to best van der Loo´s A♠ 3♠.

When the nine remaining players return to the Casino Holland this afternoon to play out the climax of the 2011 Masters Classic of Poker Main Event, blinds will be 15,000/30,000 with a 3,000 ante. The average chip stack is 983,200 and only Jussi Nevanlinna and Athanasios Polychronopoulos are above average contenders for the title. Just one Dutchman remains (David Boyaciyan) and, as well as four Americans and a Finn, a Greek, a Swede and a Canadian complete the international field.