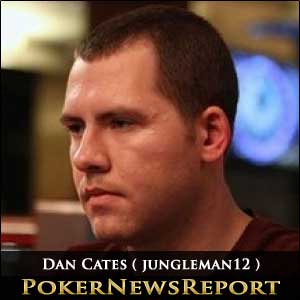 Many of the “noveau righteous” are throwing their hands up in the air and proclaiming that this scandal will be the catalyst to hijack online poker legislation in the US,  the more experienced in the industry are trying to play down the hysteria, stating that the “Jungleman12” poker cheating scandal doesn´t change a thing. And, of course, every cloud has a silver lining.

What is All the Fuss About?

For anybody who has missed the story, Jose Macedo was a pretty decent young Portuguese poker player. Unfortunately, he got involved with Haseeb Qureshi – a poker instructor with Cardrunners.com – and by association Dan “Jungleman12” Cates. By opening up multiple accounts on the Lock Poker site, the three were able to manipulate the accounts by chip dumping to look as if they were being played by wealthy “fish” (bad poker players). Macedo conned several players he was coaching into playing against these fake accounts and scammed them out of $30,000 (which Jose has now repaid).

On the face of it, Dan Cates is a highly successful online poker player – having won millions on Full Tilt Poker and PokerStars in the last couple of years. Unable to play from the United States and having his entry into Canada delayed, Cates used some of the bogus European accounts to win money from Lock Poker clients who believed (guided by their poker software this time) that they were playing a regularly losing player rather than one of the world´s most successful high stakes players. Qureshi also used these accounts – claiming that chip dumping (purposely losing vast sums of cash) was a way of funding Macedo´s real account when other forms of financial transfers were unavailable or too slow.

They Cheated and They Got Caught

The bottom line is that they cheated and got caught. However, considering the poker environment that the two main protagonists were brought up in (Qureshi and Cates), it should not come as too much of a surprise that something like this happened. Qureshi joined Cardrunners in 2008 as a poker instructor about the same time as the Brian Townsend scandal broke (In March 2008 and again in December 2009 Townsend – a cardrunners.com poker instructor – was found guilty of multi-accounting and collusion on Full Tilt Poker which resulted in a $4.2 million scam against Victor Blom).

Multi-Accounting Was The Norm

Cates played most of his poker on Full Tilt Poker, where selected professions regularly had multiple accounts to hide their identities and suck in the unsuspecting poker player. Although Cates denies this activity on his FTP and PokerStars accounts, he admitted he engaged in this practise on other poker sites – including in collusion with Macedo and Qureshi on Lock Poker. Unfortunately, when you are nurtured by a site which allows players to frequently ignore its own terms of service, this becomes acceptable behaviour (and is just one of the reasons why Full Tilt Poker should never get its licence back). Although it is no excuse for their cheating, the three characters in this saga are very young (Macedo 18/Cates still only 21) and impressionable.

Why It Changes Nothing

There have been many more high(er) profile cheating scams than this in the past and internet poker still exists. The full facts of alleged wrong-doing at Full Tilt Poker (when the company – it is claimed – funded the accounts of their professionals after a losing streak) may never come to light, but the super-user scandals at UB and Absolute Poker never stopped people from playing there in 2006 until the feds shut the site in 2011. Sorel Mizzi and Justin Bonomo still have superstar status in the poker world even though both have been caught cheating by having multiple accounts on PokerStars and Party Poker.

All the time that social media users and members of poker forums are monitoring the activities of the online poker players and the sites to which they belong there will be exposés such as this. In the end two young kids and a poker-playing crook got caught cheating and lying about it. The sky is not falling in on online poker and the silver lining attached to the cloud of this scandal is that online players will become more vigilant, hopefully reducing the frequency with which cheating occurs. And where is the harm in that?