With no takers for a heads-up challenge issued by Dan “Jungleman12” Cates, organizers have shifted gears and decided to host a high stakes cash game in Prague. 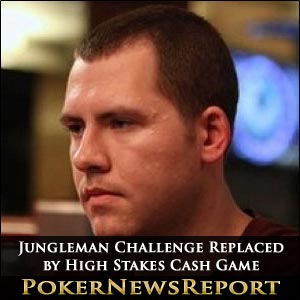 With no takers for a heads-up challenge issued in late October by Dan “Jungleman12” Cates to unofficially determine the world’s best poker player, organizers of the event have shifted gears and decided to host a high stakes cash game to be held Dec. 6 in Prague after the conclusion of the WPT Prague Main Event.

Dan Cates, one of online poker’s biggest cash winners with earnings in the ballpark of $7 million, had openly challenged any player to take him on in a heads-up high stakes match to determine “who the best poker player on the planet is,” he said upon publicly announcing the challenge in October. “I’m confident that it’s me. If anyone has the nerve to take me on, let them come to Prague in December and sit down across from me at the table,” Cates added.

The match was scheduled to be played at stakes of €200/€400 with a minimum of €100,000 needed to sit down. Organizers planned to show the match via internet stream that would reveal the hole cards of the combatants on a 15-minute delay. However, with no one stepping forward to face the Jungleman heads-up, the challenge was cancelled and quickly replaced with a cash game with stakes of €50/€100 and a sit-down minimum of €10,000.

Poker industry observers have long questioned the venue of the initial heads-up challenge, with many wondering why Cates selected Prague as the location for the match. A truly serious challenge would allow for a neutral venue to be agreed upon among the participants, many believe.

“I’ll play heads-up or I’ll play a ring game,” Schwartz said. “It’s just so cringe if these guys call themselves sharks and then run and hide.”

The cash game is set to begin at 4 p.m. local time on the 6th of Dec., with hole cards revealed on a fifteen minute delay as was scheduled for the cancelled heads-up match.