Sunny Jung won the HK$100,000 (US$12,900) buy-in Asia Championship of Poker Main Event on Sunday, after an extra day was needed to conclude the Final Table. 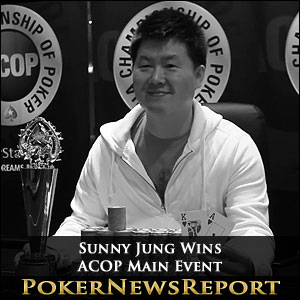 Sunny Jung won the HK$100,000 (US$12,900) buy-in Asia Championship of Poker Main Event on Sunday, after an extra day was needed to conclude the Final Table.

The PokerStars-sponsored Asia Championship of Poker (ACOP) Main Event was concluded at the City of Dreams in Macau over the weekend and, after five days of action, 203 entries had been whittled down to just the nine who took their seats at the final table on Saturday in pursuit of the HK$4,352,000 (US$560,000) first prize.

Players from all over the world had competed in this prestigious event and six different nations were represented at the ACOP final table. Short-stacked Chane Kampanatsanyakorn from Thailand was the only player in immediate danger as, when the tournament resumed, five minutes remained in Level 18 – in which blinds were 3,000/6,000 (ante 1,000).

There was a lively start to the ACOP final table. Sunny Jang made his intentions clear when pre-flop raises enabled him to take down the first two hands uncontested and, in the third hand, Chane Kampanatsanyakorn doubled-up when his A♦ 7♠ held against Chenxiang Miao´s 6♦ 5♦.

Miao and Lew Eliminated to Reduce the Field to Six

However there was to be no repeat of the 2011 APPT Macau Main Event – when Randy Lew recovered from being the shortest stacked player to win the event – as the PokerStars Team pro got all-in with pocket Sevens and, in a virtual repeat of Chane Kampanatsanyakorn´s elimination, was bust out by Jonathan Depa (9♦ 9♥) when both players made a Full House.

With three players eliminated within the first hour of play, it appeared that the Final Table of the Asia Championship of Poker might be a quick affair. However, it was more than two hours until the next player was to leave the tournament, and then only after Jonathan Depa (A♠ K♥) had seen his King pair on the flop – only to be beaten by Devan Tang´s (J♥ J♣) runner-runner club Flush.

During those two hours Yat Wai Cheng had briefly flirted with the chip lead after flopping two pairs with K♥ 5♣ and getting three streets of value from Zifan Zheng. But Zheng had fought back – rivering two pair to cripple Jonathan Depa shortly before his elimination – and Sunny Jung had chipped up close to a million after finding A♣ A♠ against Yoshitaka Okawa.

Okawa Busts after Being Ahead in Two Flops

With all five players well stacked (Tang had the equivalent of 58 Big Blinds) and big pay jumps between the remaining places, the level of action fell significantly. Very few hands went to showdown over the next two levels, but three of them that did saw the demise of Yoshitaka Okawa in fifth place.

Whatever Sunny Jung and Devan Tang ate during the dinner break fired them up for a late evening assault on the chip lead. Devan Tang hit a set of Nines to chip up against Yat Wai Cheng before Sunny Jung recovered from slipping down to 280,000 chips by doubling up against Zifan Zheng A♦ 3♥ > 5♣ 5♠ and then rivering a flush to take another 600,000 chips from the chip leader.

An overpair of Queens and an uncontested four-bet pre-flop jam against Zheng enabled Sunny Jung to join Devan Tang at the top of the leaderboard and, when Jung´s pocket Fours held to eliminate Yat Wai Cheng (K♠ Q♦) towards the end of Level 24, he moved into a significant chip advantage:-

Heads-Up Carried Over to Sunday

Not one hand went to showdown during Level 25 (blinds 12,000/24,000 – ante 4,000), and Sunny Jung increased his lead after pre-flop aggression forced folds his valuable pots from both his opponents. As the blinds rose again in Level 26, Zifan Zheng was reduced to his last 25 Big Blinds, and he chose to commit them all with 8♠ 8♣ and received a call from Devan Tang (A♥ K♥).

Zheng remained ahead during the flop of 3♠ J♥ 5♠, and collected outs to a flush after the Turn of Q♠, but the K♦ spiked for Tang on the River – eliminating Zheng from the Asia Championship of Poker Main Event and setting up the heads-up climax of the event between Sunny Jung (3,310,000 chips) and Devan Tang (2,790,000 chips). As both players were well-staked, at the conclusion of the level the decision was made to call it a night and decide the event on Sunday.

The early action of Sunday´s climax to the ACOP Main Event saw Sunny Jung increase his advantage. A rivered flush saw him take a 2:1 chip lead against Devan Tang, but Tang reduced the deficit with his own flush, and then took the chip lead at the end of Level 28 when both players missed their straight draws and paired the Seven in their hand (Jung 7♦ 4♣ / Tang Q♦ 7♥) but Tang had the better kicker.

Sunny Jung went back into the lead when he caught Tang bluffing on the River, but the positions were reversed once again when Devan Tang (6♠ 6♦) flopped a set and got three streets of value from his opponent. Some pre-flop aggression saw Sunny Tang regain the lead once again, and it seemed that it was going to take a monster hand to resolve the heads-up – then the monster hand happened.

An interesting story unfolded during the post-victory interview. Jung revealed that he had been unable to play during either of the Day 1s of the event because business commitments had held in up in Korea. An astute PokerStars employee had asked him if he wanted to enter at the end of late registration on Day 1B and play with a blinded down stack on Day 2 – to which Sunny Jung agreed. We believe that the PokerStars employee will be receiving quite a generous tip!