While poker´s big guns were entering the money at the EPT Barcelona, Julius Malzanini grabbed a massive chip lead in the Grand Live Main Event in Malta. 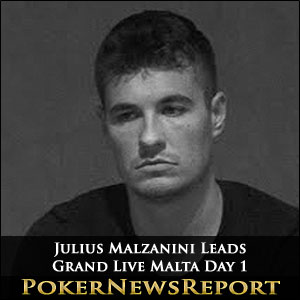 While poker´s big guns were entering the money at the EPT Barcelona, Julius Malzanini grabbed a massive chip lead in the Grand Live Main Event in Malta

Season 4 of the “Grand Live” Poker Tour (formerly the OnGame Network´s Grand Series Of Poker) kicked off yesterday at the Portmaso Casino in Malta, with 255 players either having qualified online for the Main Event or paying the €1,100 buy-in directly to participate in the four day tournament.

After nine levels of play on Day 1, German poker player Julius Malzanini leads the 115 survivors and has a huge chip advantage over the chasing pack after winning “battle of the leaders” 100,000+ chip pot with Aces > Queens against Marco Bognanni in the last hand of the night.

Not so Famous Faces in Malta …

Due to the scheduling conflict with the EPT Barcelona, the decision was made to play only one opening day of the Grand Live Main Event in Malta, but organisers need not have worried about a low turn-out. The cap of 250 players was fully subscribed by the time the tournament got underway and, with few eliminations during the early levels, only five alternatives were able to get a seat.

Among those who did forgo the chipfest in Barcelona for the more subdued setting of the Portmaso Casino were Matt Adams and Tapio Vihakas, who finished first and second respectively in the GSOP Prague Main Event last year, and Sergio Aguilar – who travelled all the way from Spain to try and repeat his success at GSOP Greece in 2011. Of the three, only Aguilar survived a hectic Day 1, closing with 64,500 chips.

Former WSOP Tournament Director Steve Frezer was in charge of the event – and he was apparently glad to be there, Tweeting

Love working this event, 0 Americans entered, 0 clock calls, 0 stalling, 0 players being rude and no one understands what I’m saying

Frezer was not quite accurate in his head count of US poker players, as David Underwood (30,700) and Sean Bian (52,600 chips) both survived the day, while Englishman Owain Carey (42,700 chips) and Irishman Kevin Downing (120,800 chips) will give him somebody to talk to if the Americans bust out on Day 2.

Looking Ahead to Day 2 of the Grand Live Malta

Day 2 of the Grand Live Malta will get underway at the Portmaso Casino at 1.00pm this afternoon, when the 115 remaining players will be embarking on Level 10 (blinds 500/1,000 – ante 100). With only 36 players due to cash in the event, it is unlikely that the bubble will be burst today, and those who will be looking to take their participation in the event further than a min cash include:-