Julian Track won the record-breaking PokerStars-sponsored EPT Prague Main Event last night for €725,700, despite suffering from the effects of a winter cold. 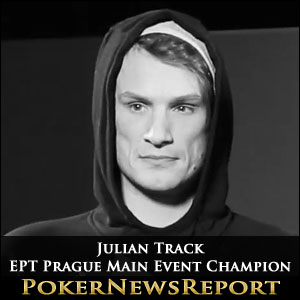 Julian Track won the record-breaking PokerStars-sponsored EPT Prague Main Event last night for €725,700, despite suffering from the effects of a winter cold.

After five exhilarating days of action, the record-breaking field of 1,007 players who entered the EPT Prague Main Event was reduced to the eight who contested the final table at the Hilton Hotel yesterday.

Going into the climax of the tournament, it was difficult to forecast who the winner might be. Chip leader Julian Track had displayed a tight opening hand range which had served him well at the right times, while Max Silver has witnessed both good and bad luck on the way to the final table.

Stephen Chidwick and Ole Schemion had become the GPI Players of the Year in their respective countries by reaching the final table of the EPT Prague Main Event, and Georgios Sotiropoulos had made some pretty good decisions during the previous five day despite his relative inexperience in live poker events.

The final table was completed by Ka Kwan Lau, Kdravko Duvnjak and Jorma Nuutinen, who – despite their below-average starting stacks – were not without a chance of making a deep run, as blinds were only 20,000/40,000 with a 5,000 ante.

Silver Melts in the Heat …

Throughout the early stages of the EPT Prague Main Event, Max Silver had shown a lot of maturity with the hands he got involved in and how he chose to play them. Having leapt into the chip lead on Day 4 with victory in an A♥ A♦ > K♦ K♠ hand against former chip leader Ludovic Lacay, Silver had managed himself well in a tempestuous battle against Ole Schemion on Day 5.

However, Max Silver melted in the heat of the final table and, after having paid off Ka Kwan Lau in a Q♣ J♣ > 7♥ 7♠ hand in which Silver had rivered a (winning) Flush, but let his hand go under pressure, he then doubled-up Jorma Nuutinen A♥ 9♦ > K♣ J♣ and folded to pre-flop aggression from both Julian Track and Ole Schemion after having been the initial aggressor on both occasions.

… but Nuutinen First to Bust

Whereas Max Silver was down 1.5 million chips in the opening exchanges, Jorma Nuutinen´s chip stack was heading in the opposite direction. After doubling up against Silver, Nuutinen took chips from Julian Track A♦ 9♥ > 8♦ 5♣ and Ole Schemion 5♦ 5♠ > A♦ Q♠ to increase his chip stack to beyond 2 million chips.

However, the possibility of a fairytale last-to-first victory for the Finn was stopped in its tracks abruptly when Nuutinen moved all-in from the hijack with A♦ K♠. Julian Track in the Big Blind made the call with 10♣ 10♥ and the cards were on their backs. The flop of 10♦ 4♦ 8♣ put Track well ahead in the hand, but gave Nuutinen hope of a backdoor flush. Sadly for the Finn it was not to be, as the 7♥ and 5♣ completed the board and Nuutinen was bust in eighth – Track now up to 9.745 million chips.

The game progressed through another two levels without any further eliminations – during which time Stephen Chidwick emerged as a potential contender to Julian Track. Chidwick (7 million+ chips) was forcing players off of pots for fun and, as blinds rose to 40,000/80,000 (ante 10,000), both Ole Schemion and Georgios Sotiropoulos became short-stacked.

Schemion got a vital double-up in a hand against Chidwick A♣ Q♥ > A♦ 9♣ and then Sotiropoulos achieved two double-ups in quick succession – A♥ K♦ > A♣ Q♣ against Stephen Chidwick and A♦ A♥ > J♥ J♠ against Max Silver – reducing Silver and Zdravko Duvnjak to the shortest stacked players. Silver leaked more chips after folding to post-flop aggression from Chidwick, but Zdravko Duvnjak was the next player to bust – making an ambitious shove with 10♥ 8♥ and running into Ole Schemion´s A♥ K♥. Schemion turned trip Kings, and Duvnjak was eliminated in seventh place.

Silver and Schemion Unlucky to be Out before the Dinner Break

Max Silver got even shorter stacked after failing to force Julian Track (9♦ 9♥) off of a hand in which Silver (A♦ J♠) had missed his flush draw, and eventually he was forced to shove with the next half-decent hand he was dealt (A♠ 10♥). Stephen Chidwick made the call with 7♠ 7♣ and although Silver took the lead in the hand on the flop of 10♠ 4♣ 8♠, the 7♥ on the River gave Chidwick a set of Sevens and sent Max Silver to the rail in sixth.

Ole Schemion was equally unfortunate to be eliminated from the EPT Prague Main Event; shoving with pocket Tens into Julian Track´s pocket Sevens. The flop of 2♥ 8♣ 2♠ presented no problems for Schemion, but the 7♠ was dealt on the Turn to give Track the best hand and Schemion was out in fifth. Just before the dinner break Georgios Sotiropoulos took a valuable pot from Stephen Chidwick K♦ Q♣ > Q♦ 9♥, so that when the players broke for something to eat, the respective chip counts looked like this:

Kwan Lau and Chidwick also Bust after being in Front

Track and Sotiropoulos Make a Deal

Due to suffering from the effects of flu, Julian Track was keen to avoid a protracted heads-up and, despite having a 27 big blinds chip advantage (16.745 million -v- 13,465 million), he instantly agreed to a deal that would see both he and Georgios Sotiropoulos wrap up €700,000 prize money and leave €25,700 to play for.

Unfortunately for Julian Track, the deal did not speed up the action, and the heads-up lasted a further two levels – during which time Track twice came from behind with lucky Turn or River cards to build a 4:1 chip advantage. However, it was almost two hours before Georgios Sotiropoulos put his tournament life at risk, and twice he doubled up Q♥ 8♣ > A♠ 4♥ and A♥ 2♠ > K♥ 6♠ before being ground down again.

It was deep into Level 33 that the EPT Prague Main Event was eventually decided. Georgios Sotiropoulos shoved from the button with Q♠ J♣ and Julian Track made the call with 10♣ 10♥. The flop of K♠ 9♥ 2♣ kept Track in front, but Sotiropoulos would double-up again with another Ten or either of his overcards. Unfortunately for the Greek poker player it was not to be, as the 4♣ and 3♠ completed the board and Julian Track was the EPT Prague Main Event Champion.