Thew won a record GUKPT Main Event in Coventry last night, to cap off an excellent week of the Grosvenor UK Poker Tour and to celebrate his birthday in style. 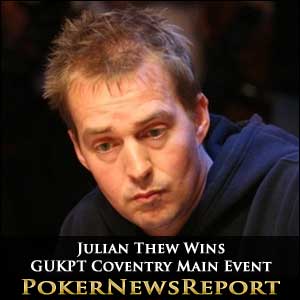 Julian Thew won a record third GUKPT Main Event at the G Casino in Coventry last night, to cap off an excellent week of the Grosvenor UK Poker Tour and to celebrate his birthday in style.

Action Man from the Start

Richard Trigg certainly lived up to his nickname of “Action Man” in the Main Event. Doubling up in the very first level of the tournament, Trigg took a chip stack in excess of 150,000 into Day 2 – only one other of the remaining 52 players had gone through the 100,000 barrier – and continued to control the game right up until the final table. By the time Day 3 started, Trigg had amassed 630,100 chips – more than double the stacks of Lee Taylor and Carl Spicer in second and third – and almost four times the stack of Julian Thew who had emerged from 24th position at the end of Day 1, to hold 6th position when the final table started.

Whatever Julian Thew had for his birthday breakfast, it certainly agreed with him. Eliminating Steve Brown in tenth, Adriano Luzzi in seventh and Stuart Rutter in fifth, Thew stripped Trigg of his chip lead in a half million chip pot when his KK held up against Trigg´s JJ and then busted Lee Taylor in fourth to set up one of the most quick-fire conclusions to a GUKPT Main Event that has ever been seen. First Richard Trigg sent Carl Spicer to the rail in third in an AK v Q10 race and, in the first hand of the heads-up, Trigg was dealt AK again, but this time he ran it into the pocket Tens of Julian Thew and – with nothing above a Jack on the board to help Trigg – the game was all over.

The total turnout for the GUKPT Coventry Main Event was 145 –each of whom paid £1,000 to enter or qualified for the tournament online. The side events were well supported as well, with a total of 400 players competing in the six supplementary events – with Carl Spicer completing a “third-placed double” in the Omaha Poker (Pot Limit) tournament and David Johnson collecting valuable GUKPT Leaderboard Points in the £300.00 NL Hold´em 2 Day tournament. Two legs of the Grosvenor UK Poker Tour remain in Blackpool (starting 6th November) and London (starting 21st November).