The second leg of the 2013 Sky Poker Tour took place this weekend with a familiar face from Sky Poker scooping the first prize in the £20,000 guaranteed event. 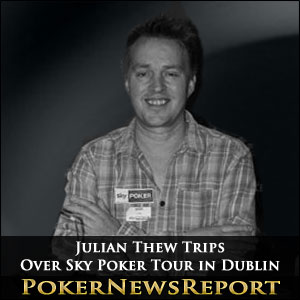 The second leg of the 2013 Sky Poker Tour took place this weekend with a familiar face from Sky Poker scooping the first prize in the £20,000 guaranteed event.

Julian ‘YoYo’ Thew won his second Sky Poker Tour event at the fantastic Sporting Emporium in Dublin over two days, beating 127 hopefuls who had paid the £220.00 buy-in or qualified online at Sky Poker or through one of the live satellites hosted in Dublin.

‘Thewy’ is going through a bit of a hot streak in live UK and Ireland poker tournaments, with the former EPT Main Event winner adding this Sky Poker Tour victory to the won he picked up in Luton last year, collecting his third GukPT Main Event win in October, the Dusk till Dawn £100K Deepstack in November and the Genting Poker Series Main Event in Birmingham earlier this year. However, this event will always be remembered as the one he `tripped over’ after the flop helped Thew through more than one significant hand.

Thew Lives up to his ‘YoYo’ Nickname as the Trips Start

Julian Thew wasted no time getting involved in the action at the SPT Dublin – flopping trip Nines after getting involved in a pot with 93o – but was down to below his 30,000 starting chip stack by the end of level 4 (that´s what happens when you go into pots with 93o!).

A helpful flop of A-A-K with pocket cards of A8 enabled the Sky Poker sponsored pro to double up just before the dinner break, but he finished the day with just 33,000 chips after leaking out a few more chips and getting none of his end-of-the-day shoves called.

Luck Strikes for Thew on Day 2

40 players returned for Day 2 of the SPT Dublin and, with blinds at 1,200/2,400 and only 12 players going to cash, the early action was fast and furious. Julian Thew picked up some blinds and antes with more uncontested shoves before doubling up with AK > A4 before the first break, but was still below the average chip stack.

After the break, a game turning hand was played out when Julian Thew shoved from the Big Blind with Q♥ 6♥ and was called by a player holding A♠ K♣. The flop of A♥ 2♥ 5♣ gave Julian Thew draws to a flush, and sure enough the 8♥ spiked on the river to take him over 100,000 chips for the first time in the event.

Heading Towards the Money and Final Table

A break later and Julian Thew was still involved – doubling up to 200,000 chips when his pocket Fours held on a rainbow board against a player chasing a flush. However, with 18 players still remaining in the event, he was still below the average chip stack of 211,000 and a long way behind chip leader Mark Strahan (500,000 chips).

Strahan extended his chip lead when knocking out Kevin Corr (AA > QQ) in thirteenth to burst the bubble but, by the time the final table of ten was reached, Strahan was being closely pursued by Joe Wilkinson and Austin Cheetham.

The first two casualties of the final table were Padraig O´Neill and Rory Brown – O´Neill shoving with pocket Nines and running into Austin Cheetham´s pocket Jacks – while Rory Brown jammed from the button with K7 and found Peter Stoneman in the Big Blind with pocket Kings.

Julian Thew´s good fortune continued however – doubling up against Mark Strahan with trip Nines (again) – and then busting Joe Wilkinson in eighth when Wilkinson´s turned two pairs of Tens and Eights were rivered by Julian Thew (K6) hitting a gutshot straight.

A series of quick elimination followed thereafter. Mark Strahan got all his chips in with K♣ 2♣ on a flop of Q♣ 3♣ 2♦, but never completed his flush to come second to Stephen Freeman´s Q♥ 8♣ top pair. Vera Duffy, who had done remarkably well with her short stack to last this long eventually, left the table in sixth place when Austin Cheetham´s AK bested her A10.

How do you Play against this Man?

It took Julian Thew little more than 90 minutes to wrap up the Sky Poker Tour, and he enjoyed the luck of the cards as he did so. First of all he crippled Peter Stoneman KK > 76 after the board ran 9-7-7-9-9 and Thew hit a runner-runner better Full House than his opponent. Then he bust Stephen Freeman J♥ J♦ > Q♠ 8♠ after the flop held two spades, and he then crippled Austin Cheetham with Quad Threes.

Peter Stoneman bust Austin Cheetham K10 > JJ to set up the heads-up against Julian Thew, but was at a major chip disadvantage – more so when Julian Thew hit trip Tens on the first hand of the climax to the tournament, and was paid all the way to the river.

Julian Thew´s good fortune with trips even lasted to the final hand of the event. Peter Stoneman shoved after pairing his Queen on the flop of 5♥ Q♠ 5♣, but Julian Thew had hit trip Fives with his 7♠ 5♠, and with the turn (8♠) and river (K♦) bricking for Stoneman, Julian Thew added the SPT Dublin to his impressive résumé of live poker victories.