According to a tweet circulated by the Poker Players Alliance, the Restoration of Americas Wire Act will not be heard during the current lame duck session. 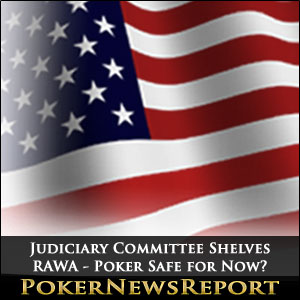 According to a tweet circulated by the Poker Players Alliance, the Restoration of Americas Wire Act will not be heard during the current lame duck session.

The US Senate Judiciary Committee is a permanent legislative panel that considers which bills should be introduced into the Senate for discussion and – ultimately – to be voted on. It is where the Jason Chaffetz sponsored HR4301 “Restoration of Americas Wire Act” (“RAWA”) has gathered dust since March and – according to a tweet by the Poker Players Alliance – is where it is likely to stay.

The bill proposed to prohibit all forms of Internet gambling as a nod to billionaire Sheldon Adelson, who has campaigned against online poker to protect his brick and mortar casino interests. Adelson has financially supported a number of Republican candidates through their political careers – including many on the Judiciary Committee – and it was feared that RAWA might be slipped through the current lame duck session in a similar way to which UIGEA was passed into law in 2006.

Yesterday Tim Hernandez reported on John Pappas´ warning for poker players to be on High Alert during the lame duck session – although the author also found a comment from the offices of Republican Assemblyman David Jolly which said I don’t think that legislation is gonna go anywhere. Fortunately it would appear that Jolly´s spokesperson was spot on as, less than a day after the article was published, John Pappas tweeted from the PPA Twitter account:

Inside info, planned Internet #poker hearing in House Judiciary cmte has been pulled. Need to remain vigilant for other lame duck actions JP

Although the source of the information and the reason for the Judiciary Committee shelving RAWA is not known, speculation suggests that the Judiciary Committee has got its hands full with legislation that the Democrats want to push through prior to losing their majority in the Senate while the Republicans are determined to prevent President Obama´s plan to change the country´s immigration system.

The news will be of great relief to online poker players – and the states of Nevada, New Jersey and Delaware, where there was a real risk of regulated online poker being scrapped – but Pappas´ warning against complacency at the end of his tweet should be taken seriously. The Judiciary Committee´s shelving of HR4301 does not mean there is no chance of the bill being tagged onto the end of some unrelated legislation (just as UIGEA was in 2006).

Whether that means the bill will be passed or not is anybody´s guess, although there has been some very vocal opposition to proposals to scrap internet gambling that lawmakers may want to take heed of.

Yesterday, Ron Paul – a former two-time Republican presidential candidate – accused Sheldon Adelson of “cronyism” by trying to buy anti-gambling legislation that would serve his own interests and, when Paul´s opinions were published on Reddit, the thread trended to the top of the Reddit community with more than 1,200 pro-gambling comments.

Hopefully Republicans will take notice of Ron Paul´s accusations and the strong depth of felling against Sheldon Adelson if an attempt is made to slip RAWA through the legislative back door. As John Pappas commented, it is important that poker players remain vigilant and maintain the “fight the ban” campaign through the PPA´s Daily Action Plan and other initiatives intended to advise Senators from all political parties of players´ rights to play online poker in the United States.