The Black Friday case against the board members of Full Tilt will progress against all but Ray Bitar, who first has to face the new criminal charges. 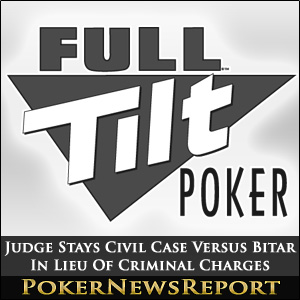 The Black Friday case against the board members of Full Tilt will progress against all but Ray Bitar, who first has to face the new criminal charges.

Judge Leonard B. Sand has ruled that proceedings in the civil case will be on hold for Bitar, while Howard Lederer, Chris Ferguson and Rafe Furst will continue to face the allegations against them resulting from the Black Friday indictment. The three poker players who became Full Tilt executives recently filed separate motions to dismiss the amended civil complaint filed against them. The trio are not facing the criminal charges that Bitar must answer to that were unsealed in a superseding indictment upon the 40-year-old’s return to American soil on July 2.

Bitar had been living in Ireland, the home base of Full Tilt Poker, and had reportedly cancelled a scheduled trip to the U.S. upon learning of the indictments that shocked the online poker industry on April 15, 2011. Bitar remained on the lam until his voluntary surrender in New York earlier this month. Much to his surprise and that of his attorneys, federal agents didn’t wait for him to deplane upon touching down in New York, going on board to arrest Bitar and serve him with a superseding indictment that carries severe criminal charges for–among other allegations–wire fraud and conspiring to defraud banks. Prosecutors allege that Bitar continued running a global Ponzi scheme following the Black Friday indictment by assuring players to continue making deposits and that their money was safe, when he knew full well that this was untrue.

The Full Tilt CEO spent a week behind bars before being allowed to post a $2.5 million bond that included the forfeiture of his passport, limited travel between his home in California and New York, and wearing an ankle bracelet that monitors his movements. Following his arrest, Bitar made a statement informing the poker community that his decision to surrender was a precursor to the eventual reimbursement of funds to Full Tilt players who have been waiting well over a year for their money.

Bitar is facing 145 years in prison if he is found guilty of all charges and receives the maximum time allowed. However, the incarceration would be 30 years if the sentences on each charge were to be served concurrently. Expect neither to happen, as the judge who allowed Bitar to post bail expressed hope that the parties would enter into plea bargain discussions.