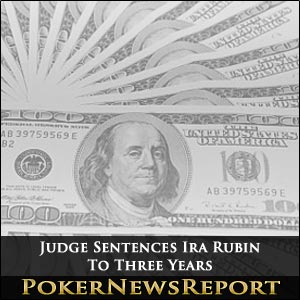 At his sentencing hearing Thursday, U.S. District Judge Kaplan called Ira Rubin an unreformed con man and fraudster for his 15 previous convictions throughout his life of crime and his part in processing payments between online poker sites Full Tilt Poker, PokerStars and Absolute Poker and players wishing to fund their accounts. Ignoring sentencing guidelines that called for between 18 and 24 months in the slammer, Kaplan instead came down hard on the 54-year-old. Rubin had hoped for a light sentence in copping a guilty plea to charges of conspiring to commit bank and wire fraud, money laundering and illegal gambling,

Although Kaplan showed leniency in previously sentencing John Campos and Brent Beckley, doling out three-month and 14-month sentences respectively, to those payment processors who admitted guilt, he believes there is little hope of Rubin changing his criminal behavior. The judge fully expects Rubin to come out of jail an unchanged man and try to cook up some new scheme that in all likelihood will be illegal.

Rubin showed remorse at his sentencing hearing, breaking down in tears a number of times and telling the judge that I know this is my last chance to have a productive life. Rubin’s elderly parents, both in their 80’s, as well as other friends and family members, are apparently behind the former payment processor, a support that had been lacking for well over 20 years. But the judge wasn’t swayed. He cited Rubin’s past criminal record that includes an $8 million judgment from the Federal Trade Commission in the mid-2000’s for operating another payment processing scheme that banked on fraudulent telemarketing.

Rubin has been locked up since being arrested by authorities in Guatemala in April of last year, apparently just before attempting to flee to Thailand to avoid prosecution. Prosecutors detailed Rubin’s troubles with the law dating back to the 1970’s in a number of states, including Florida, New York and Nevada. Assistant U.S. Attorney Arlo Devlin-Brown also told Judge Kaplan that Rubin tried to stash some money in Costa Rica–his home since 2008–and prosecutors expect difficulties in extracting $5 million ordered to be forfeited from Rubin in addition to his three-year prison term.

Rubin made a final plea for mercy, telling the judge that I’m 54 years old and I’m tired of running. I just want to go home to my family. But Kaplan agreed with federal prosecutors that Rubin poses an extremely high threat to continue breaking the law post-release and that society should be shielded from his brazen, quite deliberate and deceptive behavior of law-breaking.