The £1 million guaranteed prize pool for the UKIPT Nottingham Main Event looks like being smashed after 419 entries were received on Day 1B of the tournament. 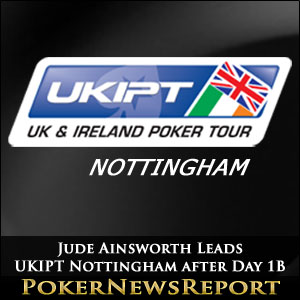 The £1 million guaranteed prize pool for the UKIPT Nottingham Main Event looks like being smashed after 419 entries were received on Day 1B of the tournament.

A massive Day 1B field in the UKIPT Nottingham Main Event ensured that there would be no chance of an overlay in the £1 million guaranteed tournament, as 419 players were added to the 175 players who competed in yesterday´s Day 1A.

With today´s concluding Day 1 flight already maxed-out (450 players), tournament hosts Dusk till Dawn will be looking for late “alternative” entries to smash their own record for the most valuable UKIPT Main Event – currently £1,137,500 in the 2012 UKIPT Nottingham Main Event won by Robert Baguley.

A Game of Two Halves for Ainsworth

However, it was very much a game of two halves for Ainsworth; as through the first five levels he had only managed to increase his starting stack by 3,000 chips and only started to climb the UKIPT Nottingham leaderboard when his table featuring Carlo Citrone, Kyriacos ‘Greek Jack’ Dionysiou and Chris Moneymaker broke.

Thereafter his chip stack knew no limits, and he Tweeted Sleep deprived, half pissed and running shit hot after flopping a set of Eights to bust Chun Law 8♣ 8♥ > J♣ 9♣ (on a Jack-high flop) to move up into the chip lead.

Behind Jude Ainsworth on the leaderboard are a number of players who competed on the final table of the UKIPT Nottingham High Rollers earlier in the week and plenty of recent UK poker champions.

Joint winner of the High Rollers event – Richard Kellett – bagged and tagged 228,700 chips at the end of the night to lay in second place overall, and David La Ronde (90,000 chips) and Steve Warburton (82,000 chips) will not be too disappointed with their above-average chip stacks.

UKIPT Isle of Man Champion Duncan McLellan made his presence felt at the tables with 130,000 chips, WPTN Marbella winner Steve Watts scored some late pots to finish with 102,000 chips, and GukPT Grand Final victor Kevin Allen helped himself to 71,100 chips.

Looking Ahead to Day 1C of the UKIPT Nottingham Main Event

As happy as Dusk till Dawn is with securing the £1 million guarantee, club owner Rob Yong is always looking to push boundaries and set new records, and last night he Tweeted we can take c200 alternates on Fri which would be biggest UKIPT prize pool EVER!

Day 1C already has 450 confirmed players – including PokerStars Team Pros Liv Boeree and Fatima De Melo – and it looks like being a colossally busy day at the Nottinghamshire poker club. Play gets underway at noon, and today´s entries will be looking to emulate the 155 players who have already survived through to Saturday´s Day 2 (113 from yesterday, 42 from Wednesday´s Day 1A). Those who will enjoy a day off from the hustle and bustle include: