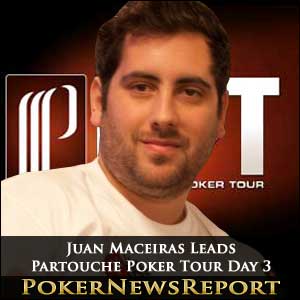 The PokerStars-sponsored professional, who has never before cashed in a French poker tournament, holds a narrow advantage with 800,000 chips over top French challenger Ludovic Lacay (771,000 chips) and Italian Poker Tour winner Mustapha Kanit (769,000 chips), with a gap developing back to Day 1 chip leader, Giuseppe Pantaleo (673,000).

The Fate of the Previous Chip Leaders

Overnight leader of day 2, Oleksii Kovalchuk, – who had bagged up an incredible 892,500 chips at the end of Day 2 – had an absolute nightmare of a day to finish on 143,500 chips, but still fights on among the 47 players who remain in a bid to capture the €1,000,000 first prize. Lionel Anton – who led the field on the quieter Day 1A of the event – had a reversal of fortunes in the opposite direction, building up his stack to 633,500 chips to rest happily overnight in seventh position.

A Day of Mixed Fortunes for the British

There were high hopes for the fortunes of the five remaining UK poker players when Day 3 started at the Palms Casino in Cannes. With only 101 players remaining, and 63 to cash, the first job was to negotiate the bubble and then press onwards and upwards towards the final table (not due to be played until November 12/13 – just after the WSOP Main Event has concluded).