Yesterday, Wisconsin crowned the victor of the biggest tournament in state history, as Josh Reichard Wins $78k in the PokerNews Mid-States Poker Tour. 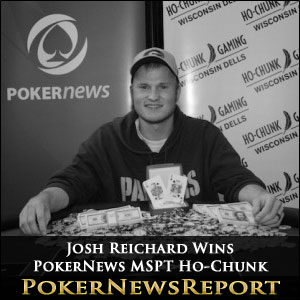 Yesterday, Wisconsin crowned the victor of the biggest tournament in state history, as Josh Reichard Wins $78k in the PokerNews Mid-States Poker Tour. When the average person thinks of Wisconsin, one of the last things that come to mind is gambling. Better known for its livestock than its casinos, the state of Wisconsin recently played host to the largest poker tournament in state history, proving that a thriving live poker market can be found in even the most unapparent places. The PokerNews Mid-States Poker Tour Ho-Chunk at Wisconsin Dells attracted a healthy field of 305 runners, each of which ponied up a $1,000 for their chance at the title. When the smoke cleared it was 22-year old Josh Reichard that would prove victorious, defeating a tough final table that included former WSOP bracelet winner Chad Holloway and MSPT POY hopeful Brett Kuznia. For his victory young Josh would be awarded $78,003 and a prestigious RF Moeller diamond bracelet. Reichard would begin his journey shortly after signing up for Day 1B of the tournament. He would have a relatively pedestrian first day, sitting on roughly an average stack when play concluded. But Day 2 would prove a different story, as the rising star accumulated a massive 1.08 million chips – good for the chip lead and a nearly 1.5-to-1 chip advantage over second place.

Local poker dealer Jason Seitz would be the first player knocked out of the final table, earning over $7.3k for his ninth place effort, and bringing his career earnings on the MSPT to nearly $79k. Kuznia and John “JohnnyGstaks” Hayes would fall in seventh and sixth place respectively, shortly after Brian Smith was eliminated in eighth. Hayes and Kuznia would fall on the same hand, as both shoved all-in only to be called by Reichard from the big blind. It was a dream scenario for Reichard as he woke up with pocket Aces. Holloway was bounced in fifth when his A♥K♥ was out-flopped by Rob WazWaz’s A-T. Shortly thereafter, WazWaz, who himself staved off elimination several times, ran his pocket eights into Miroslav Semanisin’s Aces. In one of the most defining hands of the tournament, Reichard would raise preflop with the meager holding of 2♣5♣.  Semanisin elected to just call with A♠10♥ and the two saw a flop. Reichard fired a continuation bet on a 4♠K♠5♥ board and the nonbelieving Semanisin made the call. The turn brought the 10♥ vaulting Semanisin into the lead. Reichard fired a second barrel and was called once again. But luck was on the young man’s side, as he spiked the 2♦ on the river. He jammed and Semanisin tank-called. Semanisin who went into the hand with a narrow chip advantage over his opponent was left with a single big blind, and exited on the next hand.

And then there were two. Reichard held a massive chip lead over Mark Borns, who had been relatively quiet at the final table. Early in the heads-up match the attorney from Madison called an all-in from Reichard with Q♠4♠. Reichard showed K♠J♠, taking away the possibility of Borns winning with a flush. The board bricked out low, 2♣6♣2♦8♠9♠ and Reichard was declared the victor. It was only Reichard’s second MSPT cash, his first coming at the very same tournament stop in 2012. Prior to his victory, Josh had only banked two other five figure cashes in his relatively young career. Photo credits: PokerNews.com