First place at the $3,000 WSOP No Limit Hold’em Shootout event has gone to New Yorker Cliff Josephy, who beat a field of 477 to win the event. 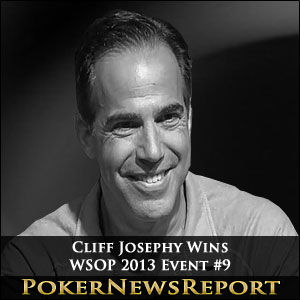 First place at the $3,000 WSOP No Limit Hold’em Shootout event has gone to New Yorker Cliff Josephy, who beat a field of 477 to win the event.

Ten players were left on the final day of play, with Josephy being one of four of those players to already have won a WSOP Gold Bracelet. This helped make the last day of the event one of the most competitive at this year’s WSOP thus far.

Simeon Naydenov was eliminated in tenth place as his A♠ Q♦ was unable to beat the J♠ J♥ of Evan Silverstein. While Naydenov hit a Queen on the flop, Silverstein also flopped a Jack, knocking the Bulgarian out of the tournament.

Next to go was Ryan Hughes, whose 4♠ 4♦ were beaten by David Baker’s A♠ J♠ after the J♥ came on the turn. Hughes was unable to hit trips on the river and he was sent packing in ninth place.

Chip leader Cliff Josephy got a further boost to his chip stack by knocking Chris Klodnicki out of the event in seventh place. Klodnicki called Josephy’s all in before the flop with J♣ J♦, while Josephy turned over A♣ Q♣. The Q♠ on the flop put him in the lead while the A♥ on the turn effectively sealed Klodnicki’s fate.

Josephy then went to two in a row as he eliminated Max Steinberg from the tournament. Josephy, who had 6♣ 6♠, hit a three of a kind after the 6♦ came on the flop, while Steinberg had a pair of Jacks. Steinberg’s all in after the flop was called by Josephy and he was knocked out after his hand did not improve on neither the turn nor the river.

Steven Silverman significantly boosted his stack when he eliminated Baker in sixth place after his A♦ A♣ held on the board to boost his stack to a little less than one million. Just four hands later, Alessandro Longobardi was knocked out of the tournament after his A♣ K♠ was beaten by Josephy’s 10♠ 8♠ when the chip leader hit a full house on the river.

It only took another four hands after that for Josephy to eliminate Tim West from the event in fourth place. West moved all in for 320,000 before the flop, which was called by the chip leader before both players embarked on a showdown.

West showed 6♣ 6♥ and Josephy showed J♠ J♦, putting him far in front before any cards came on the board. Josephy won the hand after the board showed 5♠ 5♣ K♦ 3♣ 8♠, further boosting his stack and making him the one to beat in three-handed play.

Third place in the tournament went to Steven Silverman after he was eliminated by Evan Silverstein following a showdown between the two. Silverman’s Ace Queen of Diamonds outkicked showed A♦ Q♦ while Silverstein turned over A♥ 10♣.

Despite being outkicked, Silverstein hit a pair of Tens on the flop after the 10♠ was shown. The 2♥ on the turn and the 7♠ on the river was of no help to Silverman and his time in the tournament came to a close.

This left Silverstein and Josephy in the event, with Josephy holding a chip lead of just over 700,000 when heads-up play began. Silverstein was not able to make any major dent in Josephy’s stack, and he was eventually knocked out of the event in second place.

On the event’s last hand, Josephy raised to 60,000 before the flop, which Silverstein responded to by reraising all in. Josephy called and showed A♠ 2♦ while Silverstein turned over K♥ 10♠.

The flop of 3♥ Q♥ J♥ kept Josephy’s hand in the lead, but gave Silverstein an open ended straight draw, a flush draw as well as potential pairs. The 3♦ on the turn did not give Silverstein any of his draws and neither did the 5♣ that came on the river.

Silverstein was eliminated from the event and Josephy was crowned the winner of the tournament, earning himself a WSOP Gold Bracelet and $299,486 in prize money.