Ohio’s Joseph Couden leads the final 27 players in the $2,500 buy-in Eight-Game Mix event #37 of the World Series of Poker (WSOP) in Las Vegas. 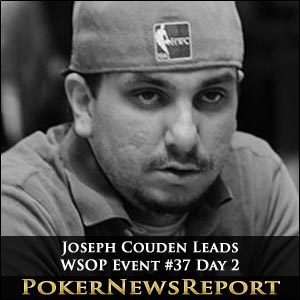 Ohio’s Joseph Couden leads the final 27 players in the $2,500 buy-in Eight-Game Mix event #37 of the World Series of Poker (WSOP) in Las Vegas.

Couden tops the chips leaderboard on 303,300 to hold a healthy advantage of 66,100 over second placed Rep Porter (237,200), of Washington State, after 10 levels of play on Day 2 saw the 209 survivors cut back once again from the original 477-player field at the Rio All-Suite Hotel & Casino.

Matt Glantz is the Bubble Boy

The money bubble came and went very quickly, with Philadelphia’s Matt Glantz the unfortunate bubble boy in 49th place. Glantz, who had been left crippled with only 500 chips from minutes before, was all-in on his big blind, but his K♥-J♦-6♠-3♣ failed to overcome the Q♥-Q♠-6♥-4♣ of one-time bracelet winner Francesco Barbaro, of Chicago, on a board of 7♥-2♥-2♠-5♦-9♥ during a round of Pot-Limit Omaha.

The deflated Glantz mumbled: Just bad luck as he left the event without collecting a payout slip. Italy’s Jeff Lisandro benefited from Glantz’s exit as he pocketed $4,763 as the first player to cash in 48th place.

Connecticut’s Jerrod Ankenman also came very close to exiting without cashing, but stayed tough during a difficult spell to then enjoy an extreme heater. Ankenman – who took down this event back in 2009 for $241,654 – will be thrilled to have a shot at glory by starting today in third place on 215,900.

Ylon Schwartz Busts Out in 40th

Day 1 featured an incredible field that was stacked with top-class pros. Unfortunately, we had to lose many of them as the field was reduced to 209 players.

Poker legend Doyle Brunson was unable to make it into Day 2, but only because he chose to leave his table after suffering some chest pains.

Felt a little flutter in my chest at the poker tournament so I got up and left. Can’t play cash and tourneys. Too long.

Of course, we hope the 78-year-old 10-time bracelet winner will fully recover and be back at the Rio’s tables very soon.