Joseph Cheong took advantage of a big double-up to run through short-stacked players and take a chip advantage into the penultimate day of the WSOPE Main Event. 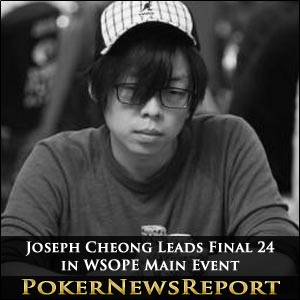 Joseph Cheong likes his autumn forays into Europe. Last year he cashed in the Partouche Poker Tour, WSOPE, EPT San Remo and WPT Amneville to add to his quarter million dollar prize for coming second in the EPT London Hi-Roller Turbo in October 2010. This year he heads a quality field of 24 as the WSOP Europe Main Event heads into its penultimate day.

Cheong´s springboard to his chip lead came at the expense of Dan Smith, who snap-called Cheong´s six-bet 300,000 chip shove from the big blind with 10♥ 10♣. Cheong turned over A♠ Q♠ and needed some help from the board. The flop of 8♠ 6♠ 7♣ was a healthy start for Cheong, and even though the 10♠ completed his flush on the turn Smith still had outs if the dealer could pair the board. Unfortunately for Smith, the J♠ enabled Cheong to enjoy a big double up which catapulted him to the top of the leaderboard.

The 4♦ on the turn kept Cheong in front, but the 4♥ on the river gave Kohlberg a better full house and the 784,000 chip pot went in the direction of the man from Massachusetts.

Plenty of Quality Lining Up Behind

Lining up behind Joseph Cheong is a field packed with quality players – indeed one observer was quoted at the start of the day as saying “33 percent of the remaining field are big names and over 50 percent are top notch players. The WSOPE ME is way better than the USA ME. This one should be getting the ESPN coverage and not the other one with 9 people nobody cares about. The money shouldn´t be the draw but the quality of play”

Although we lost Justin Bonomo (for his 23rd WSOP cash), ElKy Grospellier (for his 21st WSOP cash) Daniel Negreanu (for his 59th WSOP cash!), last year´s winner Elio Fox and walking ISPT hoarding board Prosper “there was no guarantee” Masquelier, the remaining 24 players include 12 times WSOP bracelet winner Phil Hellmuth, and notable USA players Jason Mercier, Scott Seiver, Andy Frankerburger and David Benyamine (who was deported in 2004 from the USA but still lives there).

There is plenty for the British railbirds to cheer about as well. Chris Brammer enjoyed a terrific day to finish in fourth place, while Max Silver and Toby Lewis have prominent positions on the leaderboard and healthy chip stacks. Liv Boeree got the better of ElKy Grospellier after a ding-dong day to take 411,000 chips into Day 4 of the WSOPE Main Event – where she will be seated on the same table as the tournament chip leader, Joseph Cheong.

When play recommences at the Majestic Barrière Casino in Cannes at 12.00 noon today, there are six scheduled 90-minute levels, although play will stop for the day when the field is reduced to a final table of eight. Blinds will be 5,000/10,000 with an ante of 1,000 chips.